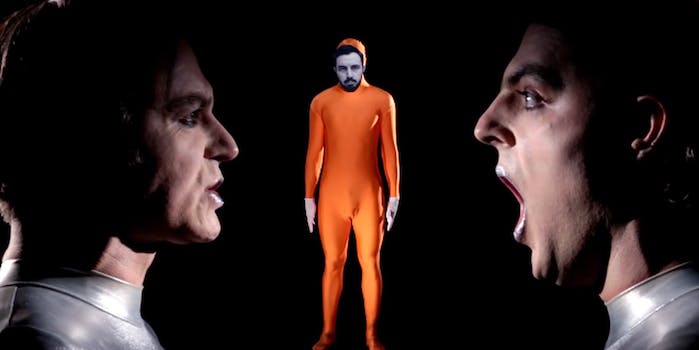 The most bizarre wedding toast you’ll ever see

This six-minute music video plays out like Night at the Roxbury set in the Tron universe and scored by Gary Numan.

Wedding toasts typically play out the same way: The best man’s already tanked, fumbling his words and making a series of bizarre in-jokes that end abruptly, and the maid of honor’s crying—even though she swore she wouldn’t—and struggling to read her handwritten notes.

Every so often, however, something extraordinary happens. Enter Baddy Paris and Rufus Starlight, whose profoundly bizarre tribute to their brother, Robin, will make you stop wondering what the fox says and focus instead on how you get to crash their next family reunion.

The six-minute music video plays out like Night at the Roxbury set in the Tron universe and scored by Gary Numan, full of Eighties synths, spandex suits, and oddly personal details.

The duo provided a little context in the video’s summary. “At his wedding we pleaded for our brother not to leave us, in the only way we knew how to say it; through the the medium of 80s music and video. We thought we’d done ok, but he left us anyway.”

“Rufus Starlight formed in August 1977. ‘We Are Brothers’ was inspired and produced just six short weeks later. Not only did it define a music video genre, it has been credited, by somebody, as inspiring ’80s icons such as Human League, Gary Numan, Kraftwerk, Heaven 17, ABC, George Michael, David Hasselhoff, and Tom Cruise.

Rufus’s star shone brightly but, oh so briefly. Almost as soon as it banded it disbanded, because of unresolvable creative differences. At the time, NME called this ‘a pity’.”

Everything about these guys is a trip.

“She may be your lover,” the two sing in robotic harmony, “but do not forget: You are our brother.”

After seeing this video, how could he?