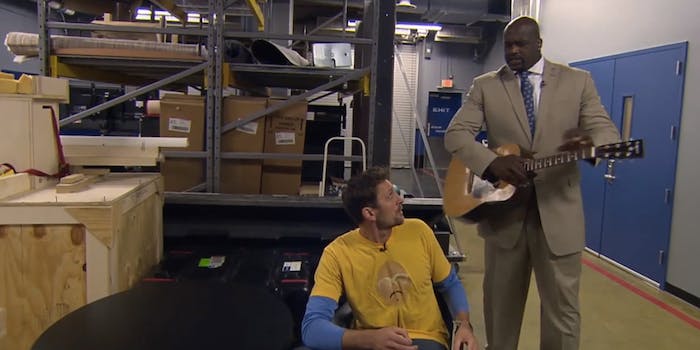 When a towering all-star requests a song, you listen.

Should Hollywood be bold enough to remake Animal House in the next few years, then Shaquille O’Neal may qualify for a role based on nothing more than his guitar-bashing technique. Here, in a goofy video for Inside the NBA, he interrupts fellow basketball champ and commentator Brent Barry’s impromptu jam session, imparting a grave lesson about sticking to the “classics.”

But don’t worry, sensitive musicians: the acoustic guitar barely suffers before being pulverized into sawdust. Imagine if it had to endure an actual verse from “Jessie’s Girl.”

Next up: breaking Jon Barry’s turntable over one knee.