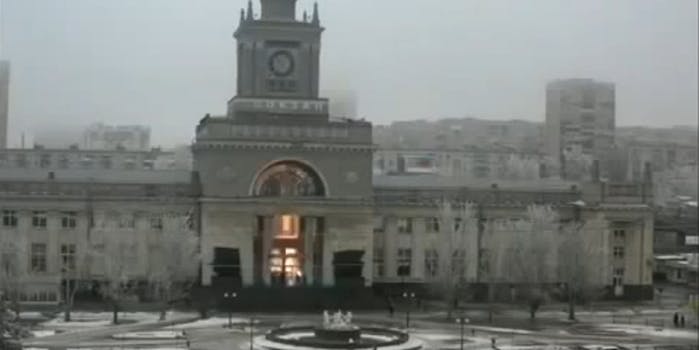 A stunning video has captured the moment the bomb exploded.

A stunning video has captured footage of the suicide bombing of a Russian train station that has killed 14 people.

The bombing, which comes on the eve of the Winter Olympics and is the second bombing attack on the city of Volgograd, Russia, in two months, occurred at approximately 12:45 pm local time. The incident, which occurred next to the station’s metal detector, was captured on video by a nearby security camera outside the station.  You can see the blast at the beginning of the video, shattering windows and the train’s clock tower and sending a plume of dust and upward skyward. In addition to those killed,  35 people have been sent to the hospital.

The Volgograd station is a popular commuter station to Moscow. The suicide bomber has been identified as an adult woman, Oksana Aslanova. Aslanova is said to be friends with female suicide bomber Naida Asiyalova, who herself reportedly had ties to extremists. In October, Asiyalova detonated a bomb filled with TNT and shrapnel on board a bus in Volgograd, killing 6 people including herself. The bomb Aslanova used at the commuter station Sunday is said to have contained metal shrapnel, with a blast equivalent to at least 10 kilograms of TNT.

Although no terrorist group has claimed responsibility for the bombing, Russian authorities are  treating the Volgograd train station attack as a terrorist attack. Volgograd, once known as Stalingrad, is near the long-rebellious region of Chechnya. In July, Chechen rebel military leader Doku Umarov urged separatists to launch attacks on civilian sites in the build-up to Russia’s Sochi Winter Olympics. Asiyalova had ties to the Chechen separatist movement, and her husband, Dmitry Solotov, was reportedly killed  in a separate bombing attack in nearby Dagestan in November.

I strongly condemn the terrorist attack on a railway station in Volgograd, Russia https://t.co/EYMb3uczrc

U.S. Russian ambassador Michael McFaugh expressed his condolences via Twitter to the victims and citizens of Volgograd.

The attack comes less than 6 weeks before Russia hosts the Winter Olympics in Sochi, and has led to heightened fears about security during the games.