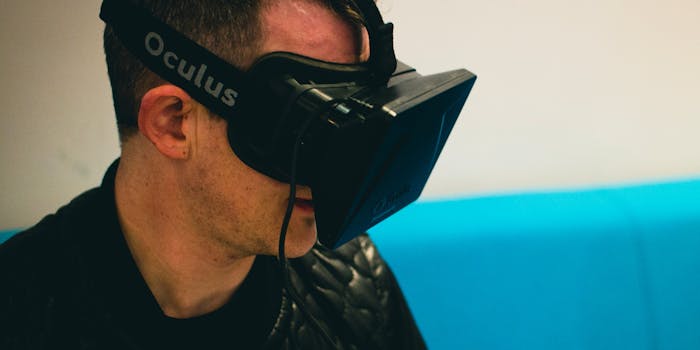 Virtual reality is overcoming the technological hurdles to make it to the market. But can it meet audience expectations?

Between virtual tours of space (both inner and outer) and simulations that let the notoriously male-centric gaming press see itself with female bodies, virtual reality has again captured the attention of tech trainspotters. It sometimes seems there’s no ceiling to their enthusiasm. Having tested a recent prototype of the Oculus Rift VR headset, Gizmodo‘s Eric Limer gushed over “[t]he squeal-demanding, face-melting, mind-bending, soul-rending miraculousness of the experience.” Finally overcome, he gave up on coherent description: “It’s just…. oh my God, you guys.”

Palmer Luckey, one of the designers at Oculus VR, insists that, “This technology is going to revolutionize the way we live, learn, work, and play.” He’s talking about the perfection of a idea that’s been bubbling in the modern consciousness since Jaron Lanier coined the term “virtual reality” in the early 1980s—headsets that fill the wearer’s visual and auditory field with scenes of computer generated worlds. Every time the Oculus team surmounts another technical hurdle (like the nausea-inducing lag that’s long plagued VR), they invite another journalist in to show off their progress.

After Oculus puts all the technical hurdles behind them, the headsets that have been the focus of so much attention over the course of the last year will cease to become the biggest obstacle to VR. The bigger question now is manage the expectations of consumers — because the one truth that’s gone largely unacknowledged as the technology has emerged is that it isn’t what many of us would recognize as virtual reality.

Part of the problem lies in the name. The images most of us conjure up when we hear the words “virtual reality” were drawn against the backdrop of science fiction from the 1980s and ‘90s. By calling Oculus Rift a “virtual reality headset,” Oculus VR has implicitly linked its product back to the Holodeck, The Lawnmower Man, and William Gibson’s descriptions of near-bodily travels through cyberspace.

Sensory immersion was one element of those cyberpunk visions, and that’s where today’s headsets have staked their claim. Still missing from the equation, though, is the sort of full-body interaction that’s long figured in fictional representations of VR. A recent upgrade to Oculus Rift introduced what the development team is calling “positional tracking,” meaning that the headset changes the onscreen perspective when you lean your torso. No doubt that’s a major technological achievement, but it isn’t exactly the sort of breakthrough that’s likely to bridge the gap between the reality of VR and our expectations for it.

In fact, most VR demos released so far have been remarkably light on interaction. To help promote the upcoming season of Game of Thrones, HBO recently paraded around a “virtual reality experience” called “Ascend the Wall.” It involved standing passively in a protective cage while the Oculus Rift moved you through a scene from the show’s Northern border. “Generally, we tend to think of the VR as being as a tool for the future of 3D gaming,” wrote Mario Aguilar, who reviewed “Ascend the Wall” for Gizmodo. “In this case, it’s a little more of a guided tour type experience in which you can look around at what’s going on, but not necessarily control a whole lot of it.”

Likewise, demos for Glyph—a VR headset that projects images directly onto the retina, rather than on screens inset into the goggles—have tended to highlight immersion over interactivity. When Rachel Metz tested Glyph for Technology Review, three of the four demonstrations were passive; two were just blockbuster movies streamed directly into Metz’s eyes. She only reports having played one game, a unnamed racer, which she controlled using a smartphone.

That matters because the success of VR has been staked largely on its potential as a gaming system. Arguably, consciousness-raising VR experiences are more likely to achieve the sort of widespread cultural change Luckey predicts for VR. With the low-price point Oculus VR is striving to hit, though, the company is going to need to attract hundreds of thousands of customers to recoup the more than $75 million investors have poured into Oculus Rift development. It’s unlikely they’ll sell that many units on the promise of gender-swapping demos like Girl Mirror Look, or an educational piece like the VR weather balloon ride into space being built by England’s Surrey Space Center.

Proving the commercial viability of the medium thus means courting gamers. For that, they’ll need a catalogue of games you can’t (or, at least, wouldn’t want to) play anywhere else. At the moment, that promise is based almost entirely on a single title: EVE Valkyrie, an outer space shooter that is at least partly controlled by movements of the players’ heads. Beyond that, you could look long and hard without finding an example of a VR game that wouldn’t be just as playable on a television.

That’s highlighted by a handful of VR remakes of older console games, including the original Legend of Zelda, Pokemon Gold/Silver and Flappy Bird. The technology will have a hard time shaking its reputation as a novelty item if the majority of its games merely revamp existing games as first-person experiences.

By most reports, what systems like Oculus Rift achieve is a higher degree of immersion. By flooding your visual and auditory senses, they confuse the spatial awareness that you’re sitting in a mundane room looking at video game worlds through a screen. That’s a selling point in itself, but developers like Luckey may not be doing their technology any favors by hyping it as a game-changer. If current projects are any guide to the future, you’ll still be controlling the action with a touchscreen or gamepad in most cases. With games like Titanfall pushing at the outer boundary of what’s possible when moving onscreen avatars though traditional games, VR platforms will need to make some major strides to avoid looking restrictive by comparison.

I’m not holding my breath that we’ll be able to ditch those tethers any time soon. The problem with the full-body interactions of fictional VR systems is that they’d be enormously complicated and costly to implement in real life. Most people aren’t going to have the resources to devote a full room to VR, as in Star Trek: The Next Generation, or even for the sort of gyroscopic full-body harness that let characters tumble through the virtual worlds in The Lawnmower Man, and we’re still a ways off from the neural shunts that piped cyberspace directly into the brains of Gibson characters like Johnny Mnemonic. When the player is visually and auditorily cut off from the outside world, how do you keep them from tripping over the furniture or stepping on the family cat? The most affordable and practical answer is that you keep them anchored to the couch, tapping away at an interface they can hold in their lap. Even the goggle-and-gloves set-up of early 80s prototypes is a model we’ve mostly abandoned, thereby saving countless living room lamps and vases from blindly outstretched arms.

In a market where even Kinect, Microsoft’s motion-tracking peripheral for the XBox, demands too much space for some consumers, retaining the control schemes of older platforms ends up being a practical concession, but also one that limits the amount of reality you can make virtual. Players who go in expecting the Holodeck may well be disappointed to find that they’ve essentially paid to strap their televisions directly to their faces.

Few things could be more disastrous for the emerging technology than the possibility that consumers will come to perceive it as a gimmick. As with efforts to sell consumers on the idea of 3D television displays, the advantages of the format must consistently outweigh the costs—not just those of buying yet another device, but also those of making yourself effectively blind and deaf to your physical surroundings.

There are a few things developers and marketers can do now to ward off that potential. They should start by distancing themselves from the term “virtual reality.” With Oculus Rift having gone so far as to include the initials in the company name, that won’t be easy, but the expectations conjured up by VR could be fatal to the technology’s commercial promise.

The second imperative should be to invest in developing games—and not just games, but entire genres—that can’t be played as well without an immersive headset. The history of Nintendo consoles has shown that it’s not enough to experiment with hardware. If developers don’t take advantage of that hardware, then the road ahead will be a rocky one. EVE Valkyrie is a good start, but it’s difficult to say for sure how much mileage developers can get from that one conceit.

Finally, it’s time to focus on a clear explanation of what gamers can expect from these rigs once they hit the shelves. Elaborating on possibilities that might not come to market for years likely won’t make the case to consumers underwhelmed by the slate of games that are available now. For players who just dropped half a grand on a next gen console or higher resolution television, a key question will be, “what can I do with a headset that I couldn’t do with my XBox or PlayStation?” Otherwise, they run the risk of becoming the next 3DO or Power Glove, video gaming devices that initially attracted a great deal of attention, but bounced off of the market with a resounding thud.

It’s a strange state of affairs when a device that aims to make us more empathetic and better educated must first prove its appeal to demographic that makes best-sellers of Mario Kart and Grand Theft Auto. Yet if VR advocates hope to see the technology usher in the revolutions they expect of it, they need first of all to demonstrate that it’s the next credible step in the evolution of a medium littered with failed consoles and peripherals. Enthusiasm will only get us so far.

Photo by Nan Palmero remix by Jason Reed (CC BY 2.0)