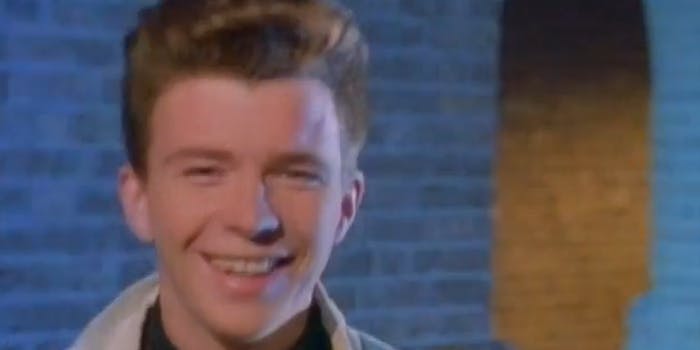 This 16-year-old developer knows the secret to posting longer Vines, but he's never gonna give it up.

Monday was supposed to be a big day for Vine, with the launch of the long-waiting Android version of the app.

The app release generated a lot of buzz—and some backlash—but it was overshadowed by an even bigger Vine story.

One developer, 16-year-old Will Smidlein, figured out how the video sharing app sends video to Vine’s servers, which allowed him to bypass the six-second limitation on clips and upload a video several minutes long.

His weapon of choice? Rick Astley’s “Never Gonna Give You Up.”

I think I broke Vine.vine.co/v/b3gY2OnrgZn

A quick primer, just in case this is the first thing you’ve read on the Internet in the last six years: Tricking your friends or strangers into clicking a link that plays that ’80s song is a popular joke that peaked in 2008. It is called Rickrolling. Got it? Good.

Smidlein said engineers from Vine’s parent company Twitter asked him to take the video down, and he complied. Smidlein also regretted causing headaches for Twitter’s engineers.

“[I]t was just for my friends and the people who follow me on Twitter and Vine,” he told the Verge, not planning for his post to go viral and instead simply hoping to play a joke on his friends.

He declined to reveal exactly how he managed to upload a full-length music video to Vine, other than to confess he broke down the Android app into component parts and figured it out from there. He did promise to reveal the method after Twitter and Vine patch the gap that allowed him to post the clip.

But why Astley? There’s a simple explanation. “I had this new power, and I wasn’t quite sure it would work,” Smidlein wrote. “I threw the only video file I had encoded correctly up, and sure enough, it worked. I had Rickroll’d Vine.”

Why Smidlein had one of the most ubiquitous videos on the Internet sitting on his computer, encoded in a specific way, is another question entirely.