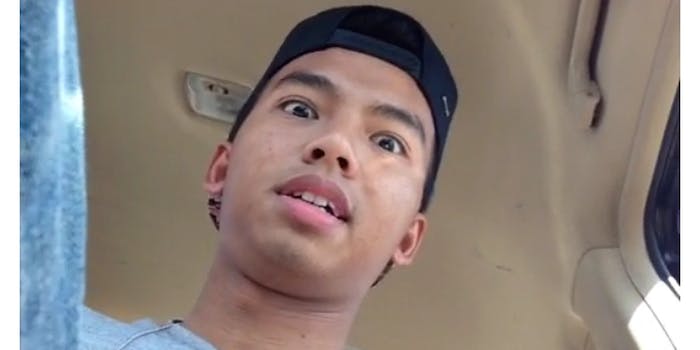 This guy vined his own breakup

How many relationships have ended with the words “Are you vining this?”

It’s a modern relationship conundrum: Did your significant other like someone else’s photo on Instagram? But how many relationships have ended with the words “Are you vining this?”

Khoaliti isn’t having a very good weekend. He recently posted a Vine clip to Reddit, in which he offers visual proof of his breakup. A quick look at his Reddit history offers mostly links to vaporizers and hookahs. For context, his Instagram says he’s 19.

He jumped back on Reddit to give the backstory after it landed on the front page today:

Holy shit! posted this here right before work and 8 hours later its on the front page! lol. long story short, this was like a 3 month relationship and as you can see I didn’t take any of the her bs too serious… problems this early on? no thanks I was out! haha.

The comment thread was sympathetic to his situation, filled with other that-was-me-but-now-I’m-free declarations. According to his Instagram, he also just got braces.