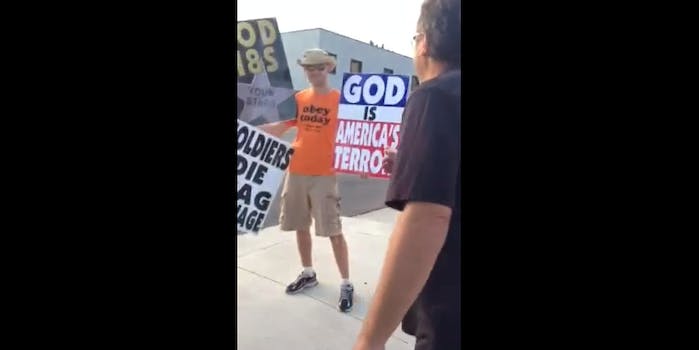 The country music star confronted members of the church outside his concert Sunday night.

Vince Gill wanted to see first-hand what “hate looks like.”

The country music star took to the streets to confront members of the Westboro Baptist Church who protested outside his concert last night at the Kauffman Center in Kansas City, Mo.

In the rough YouTube video, a woman off-screen berates Gill and calls him an “adulterer” for getting a divorce from his first wife and marrying his current wife, Christian pop singer Amy Grant, in 2000. The church believes divorce and remarriage are the same as cheating. Gill tells the protesters they’re lucky their signs don’t make mention of his wife.

It gets better. From there, Gill offers a few words on Jesus’s teachings of forgiveness and grace.

There’s a great country song in there somewhere.