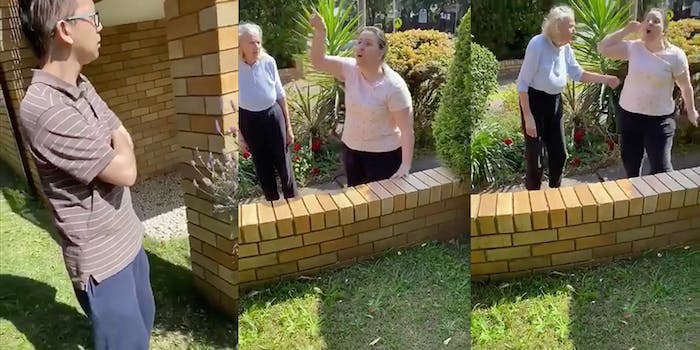 Karen freaks out on landscapers for parking in front of house

The episode resulted in a feud between neighbors.

A video that surfaced via Reddit shows a Karen completely losing it at gardeners for seemingly parking their car in front of her home to landscape her neighbor’s lawn. In the video, the Karen can be heard screaming and cursing at the crew of workers, while threatening to call the police for loud noises from the lawn mower.

The video begins as the Karen explains that she will be calling the cops because she can’t deal with the noise of the lawn mower and the landscapers’ equipment truck from inside of her home. “Move the fucking truck somewhere else,” she screams at the man recording and other crew members.

The vehicle was allegedly parked in front of Karen’s house instead of the neighbor’s for which the gardeners were performing a service. At that point, the group of landscapers attempts to alleviate the situation by telling Karen that an email was previously sent to her by the neighbor, listing the date and time that they would be performing maintenance, and also warning of potential noise or disruptions otherwise.

“Yeah,” she yells in response. “He said that you’d be working, he didn’t say that you’d be parking your piece of heavy machinery in front of my house.”

Things escalate more when the man recording tries to tell Karen that her dad, who also lives in the home, said that parking the vehicle in front of their house temporarily would be fine. “I don’t care what my dad said. Fucking move,” she shouts, again threatening to contact authorities regarding the incident. “This is my house, I live here. How do you suggest I deal with hours of this fucking noise?”

Eventually, another woman who looks to be the Karen’s mother attempts to step in, pulling at her arm and encouraging her to come back inside.

“What do you want me to do? How are we gonna do the job without the machine?” asks one man working on the lawn. Again, Karen demands that the crew move the vehicle somewhere else, as she “can’t deal with the noise for hours.”

Once the neighbor finally comes outside to address the altercation ensuing on his lawn, Karen berates him with a verbal attack, saying “You’re a fucking asshole. I can’t believe you have allowed them to park a heavy piece of machinery in front of my house. I have to work today, OK?… Go fuck yourself, Patrick,” she interjects before heading back inside, and again, threatening to call the police. “Fine, do what you like,” she says. “You will pay.”

It is unclear whether the group of landscapers in the video ever decided to move their vehicle to a new location, or whether police were contacted to handle the incident.

In response to the video, one Reddit user recapped the situation, commenting that Karen “doesn’t understand that yardwork makes noise, so I want you to leave.” User monster_breeder wrote, “That was an absolutely vile display, Karen. An utter disgrace.”

In another comment, Reddit user MagicGehmer wrote a proposed solution to the entire episode, saying “Calmly approach the homeowner having the work done, explain that you’re working from home and that the machine outside is creating a lot of noise, and politely ask if he can have the workers move it to the other end of the property,” they wrote. “I feel like that way they might be more inclined to do it…. if someone was to scream at me like that, I’d make as much noise as I possibly could.”