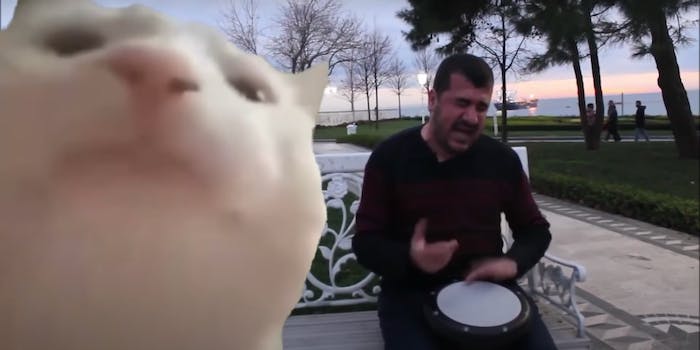 It's the most chill cat.

As hectic as things might be right now, a vibing cat can help alleviate some of that stress.

Want proof? Look no further than a recent entry from @CatVibesTo, a Twitter account dedicated to inserting footage of a cat moving its head alongside whatever music or scene people request. Ludwig Göransson’s Mandalorian theme is fantastic on its own, but with a vibing cat, there’s an even greater sense of calm that washes over you up until the music picks up; so does the cat.

Vibing cat has come a long way to become the subject of a music request Twitter account, and like a good portion of memes that circulate now, its journey isn’t restricted to one particular platform.

According to Know Your Meme, the original cat video, which was uploaded to TikTok back in April by Mick Lagi, was set to Jonas Blue’s “I Wanna Dance.” It appears that the cat’s head motion is something that Lagi is controlling versus something that the cat is doing organically.

The video caught on, and in the months since uploading the TikTok, Lagi—who refers to himself as “CEO OF THE CATJAM”—has posted additional videos of his cat (as well as other cats) jamming along to other songs.

CatJAM, as the vibing cat is also known, spread far and wide online. CatJAM went viral back in July after someone reposted it to Twitter. The cat is a transparent Twitch emoji and soon became a reaction GIF on other sites.

Once catJAM became a GIF, it didn’t take long for people to insert it on top of other videos; in some cases, people made the background of the original vibing cat video into a green screen so that people could superimpose any image they wanted to.

And so, by the end of October and early November, catJAM is now dancing along to whatever song we want it to; @CatVibesTo is far from the only person who’s been doing it.

It’s easy to see the ubiquity that comes with the vibing cat. The cat can bop along to just about any piece of music or agree with a point being made, as was the case with a recent post on r/FuckYouKaren. But sometimes, a meme doesn’t require much thought for it to work—and it’s why the vibing cat works so well.