Verne Troyer was searched by the TSA, and it was all caught on camera

“Another day another flight. #TSAstruggles”

On Sunday evening, Verne Troyer, best known for his role as the villain Mini-Me in the Austin Powers series, tweeted the following photo of him in a motorized wheelchair, getting his backside examined by the TSA.

Troyer also posted the photo on Facebook and Reddit, where he’s become a regular fixture since early February. Troyer’s photo was a big hit with Reddit’s TSA-hating crowd. It even collected a comment from redditor RyanSaysThings, explaining his security experience as a fellow wheelchair user. 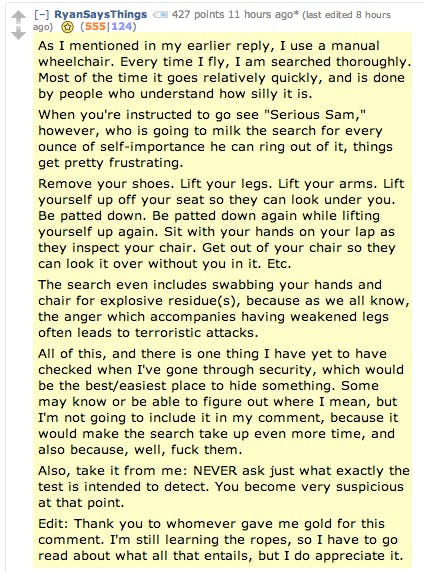 Troyer is just the last in a never ending line of people who have publicized their lousy TSA experiences on social media. This has included a rapper, blogger with cancer, and a toddler.