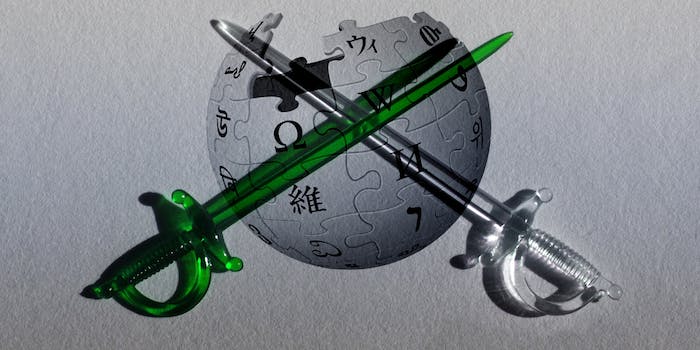 Vengeance via Wikipedia: How editors can punish those who get in their way

There's a disconnect at the heart of Wikipedia.

On Jan. 3, Jack Anderson, the founder of the science journal blog Scholarly Kitchen, got into an argument with a stranger on the Internet. Now, people get into arguments on the Internet all the time. It’s one of the reasons why Facebook is so popular.

But this argument was different. Anderson got into a flame war, albeit an incredibly polite, articulate flame war (it’s a blog about publishing scientific journals, after all), with a Wikipedia editor. The next day, Scholarly Kitchen’s Wikipedia page disappeared.

While the page was eventually restored (in a significantly abbreviated form), the incident presents a window into Wikipedia’s editing culture, which Anderson calls ?technocratic and abusive.”

What sparked the heated debate in the first place was a post by Anderson attacking precocious teen whizkid Jack Andraka, who’s been credited with a major breakthrough in cancer research.

Andraka became an overnight celebrity in 2011 when he won Intel’s annual high school science fair by developing a new way to test for pancreatic cancer. The method was reportedly faster, cheaper, and more effective than those currently on the market. He accomplished this feat at the tender age of 15. The achievement earned him appearances on television shows like 60 Minutes and the Colbert Report. He was the personal guest of First Lady Michelle Obama during the 2013 State of the Union address and has given multiple TED Talks. Since Andraka did his research for the project using nothing more than free, online resources like Wikipedia and open-access scientific journals, he’s been held up as the poster boy for the open-access movement.

?It sounds too good to be true,” Anderson wrote. ?And, if you’ve lived a while, you already suspect what’s coming next.”

In his post, Anderson charged that because Andraka came from a well-to-do, ?scientifically-oriented” family, his ability to use open-access resources to discover a breakthrough that eluded the scientific community might not be universally replicable for other young people. He took the media to task for accepting Andraka’s claims at face value despite the lack of peer review and slammed the teenager for taking steps toward monetizing his discovery for personal gain.

Unsurprisingly, the article sparked a lively discussion, with Anderson personally responding at length to nearly every reader comment. At one point, Anderson got into an argument with a commenter going by the handle ?ECH” about whether or not Anderson had implied Andraka edited his own Wikipedia page in a manner that involved ?a good deal of self-promotion.” 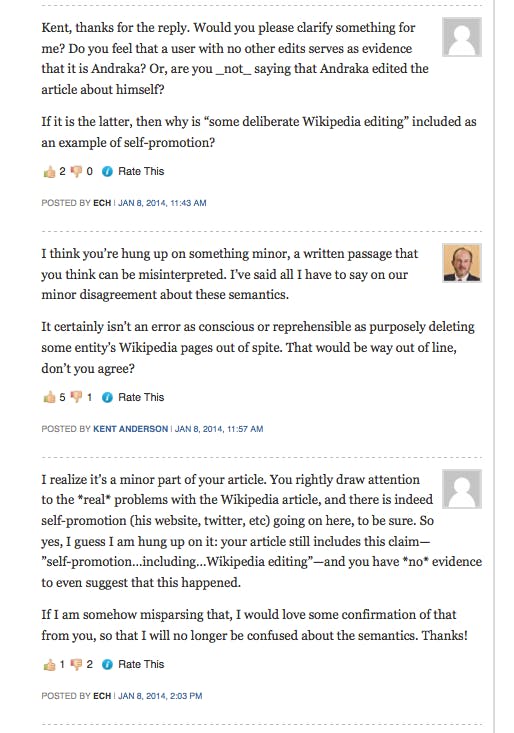 Offline, ECH is Erik Haugen, an avid Wikipedia editor who has contributed to the site for nearly a decade and was granted administrative privileges in 2011. In an email to the Daily Dot, Haugen explained that he took a look at Andraka’s Wikipedia page only to find no concrete evidence that Andraka had written the page himself.

“It seemed inappropriate for Anderson to so carelessly get this wrong, and then go on to almost seemingly blame Andraka for all of the Wikipedia article’s problems,” Haugen explained.

The two went back and forth in Scholarly Kitchen’s comments section, arguing over the phrasing of certain sentences. They agreed there were some problems with the Andraka’s Wikipedia entry but diverged on who was at fault.

That’s where the issue likely would have ended if Anderson hadn’t gotten a message the following morning from a frequent Scholarly Kitchen reader notifying him that the site’s Wikipedia entry had been deleted. The entry for the Society for Scholarly Publishing, the organization that publishes Scholarly Kitchen, was also flagged for removal.

After a bit of an uproar on Twitter, Haugen went back and restored Scholarly Kitchen’s page; however, it was significantly truncated and, according to Anderson, contained a number of new inaccuracies.

“I know that when someone’s article is deleted; either one they wrote themselves or one about them, it can be upsetting,” Haugen said. “I should have realized that this would have caused this kind of effect and gotten the new versions of the pages up right away upon deletion.”

Haugen said he found the vitriol against him in the wake of the incident upsetting. “I was dismayed that my motives for deleting were so completely misunderstood. Again, though, I can hardly blame anyone but myself for the way it came across.”

Haugen said the pages contained what he called ?copyright issues.” Basically, the Wikipedia pages of both sites had been taken practically verbatim from the sites’ ?About” sections. This kind of direct copy-and-pasting is strictly verboten on Wikipedia, unless permission is explicitly granted through something like a Creative Commons license. In this case, no such notification was printed on the website, making it a fairly cut-and-dry violation of Wikipedia policy.

The reason for the rule isn’t complicated—lifting large blocks of text could expose Wikipedia to lawsuits for stealing someone else’s content. That’s why the site encourages writers to paraphrase, rather than copy, as a simple way to minimize risk. It also promotes objective and scholarly contributions over overtly promotional ones.

“It was never my intention for there to not be an article about … [the sites], just to fix the legal issues,” Haugen explained.

However, the entries for both Scholarly Kitchen and the Society for Scholarly Publishing were created by Anderson’s coworkers. “It couldn’t be copyright infringement because we wrote the text and therefore own the copyright,” Anderson countered. “It’s just another example of Wikipedia putting rules over sense, rules over expanding the knowledge base.”

It’s unlikely the irony of this revelation was lost on Haugen. Anderson had accused Andraka of editing his own Wikipedia entry, yet Scholarly Kitchen’s page was admittedly created by someone who worked on the blog.

Of course, even if there wasn’t a copyright violation, Wikipedia also has a conflict of interest policy that prohibits ?contributing to Wikipedia to promote your own interests, including your business or financial interests.”

Anderson should be familiar with the rule. He was personally barred from editing Wikipedia for violating it.

Early last year, Scholarly Kitchen did an investigation into the potentially untoward relationship between the National Center for Biotechnology Information and the life science journal eLife. The blog initiated a Freedom of Information Act (FOIA) request and came away with a trove of documents showing that the government-funded organization gave the journal’s publisher preferential treatment.

Anderson recounts being thrilled by the accomplishment and attempted to add a reference to the investigation to Scholarly Kitchen’s Wikipedia page. His changes were quickly rejected and he was banned from editing.

If all of this sounds like a tempest in a teapot, that’s because it is. However, Anderson’s criticisms of Wikipedia are borne out of feeling of a disconnect between what Wikipedia purports to be—a massive repository of information to which anyone, no matter their status, can contribute—and how it actually operates. That is, with Wikipedia’s dedicated, if notoriously insular editing community enforcing arcane and often rigid standards.

Until those two concepts are reconciled (or people stop getting into arguments on the Internet) this won’t be the last time we hear complaints about how the passions of an individual Wikipedia editor affect one of the most important sites on the Web.

“Sometimes discussions get heated, editors make actions they later regret making, and resolutions can be found in pretty short order,” Jay Walsh, a spokesman for Wikipedia, told the Daily Dot. “It is a wiki, which means actions can be undone and edits can be reverted. That’s part of the culture of any thriving wiki. Particularly for a project focused on documenting all of the world’s knowledge, you can expect that there will always be some conflict and some efforts to undo and redo some of the knowledge in the project.”