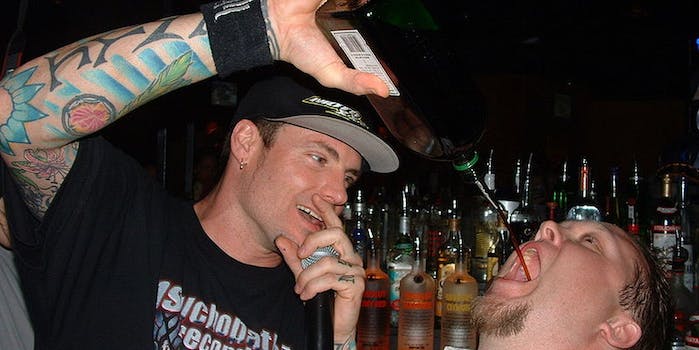 Will this washed-up rapper get washed out to sea?

After killing 100 in Haiti, Category 4 Hurricane Matthew bore down on Florida’s east coast Thursday, with winds reaching 140 mph. Gov. Rick Scott ordered some 1.5 million people in the state to flee the dangerous storm: “You need to leave. Evacuate, evacuate, evacuate,” he said.

But one man didn’t listen. His name? Vanilla Ice.

This hurricane is serious and coming right at me. I'm going to ride out the storm. I'll keep you updated pic.twitter.com/LQGzAFY9O8

We advise listening to your local officials, not @vanillaice. If you are in an evacuation zone, you should leave now. #HurricaneMatthew https://t.co/Xt1XkH4ftk

Plenty of other Twitter followers exhorted the one-hit wonder to drive west, out of Matthew’s path, but one person said it better than most.

Seriously, bro. Just leave. No tweet is worth your pseudo-celebrity life.

Right now things are pretty calm, but you know what that means, the calm before the storm. The entire Florida Georgia and Carolina Coast