With sex toy inventors creating smart vibrators and startup bros inventing a “sweet peach” hack to make women’s vaginas taste more like fruit, it seems like lately Silicon Valley has been attempting to disrupt an entirely new space: ladies’ vaginas. Apparently, the trend has extended across the pond as well. Introducing LadyCare, a device sold through the pharmaceutical chain Boots that’s literally a magnet for your vagina. 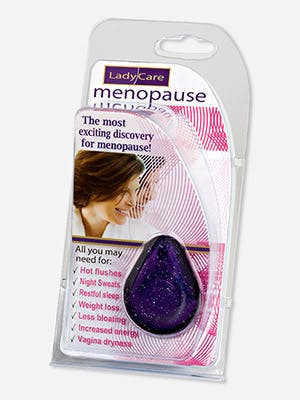 At this point, you might be wondering, “Wait, what exactly is a magnet for your vagina, and why do I need it? Does it work like the magnets in the Wile E. Coyote cartoons, dragging unwitting penises toward the general direction of my vagina? If so, doesn’t that raise some pretty blatant consent issues? Is it more for decorative purposes, like the fruit magnets my piano teacher had on her fridge? Or is it more like a magnet for your vagina in the theoretical sense, the same way there are, like, magnet schools?”

Well, yes and no. According to the product description on the Boots website, a vagina magnet is essentially a small, teardrop-shaped magnetic device that attaches to the inside of your underwear. It’s intended for menopausal women because it’s designed to reduce pains and hot flashes, as per the LadyCare website:

LadyCare relieves menopausal symptoms by helping to rebalance part of the autonomic nervous system (ANS). The technology works to reduce the sympathetic nervous systems excess and increase the parasympathetic activity, and so creates a healthier balance between the two parts of the ANS.

The question is, does it actually work? Former Go-Go Belinda Carlisle, a spokesperson for the product, along with user reviews on the Boots website, suggest that it does. “It hasn’t stopped the flushes totally but they are very few and far between and minor,” one writes.

Experts aren’t so certain. Dr. Ben Goldacre, the author of the books Bad Pharma and Bad Science, has said that vagina magnets are bunk, referring to them in a 2009 Guardian piece as “fanny [British slang term for ‘vagina’] magnets.”

Well, OK, then. The science may cast doubt on this product. But who doesn’t want to live in a world where women can strap tiny little magnets to their vaginas?