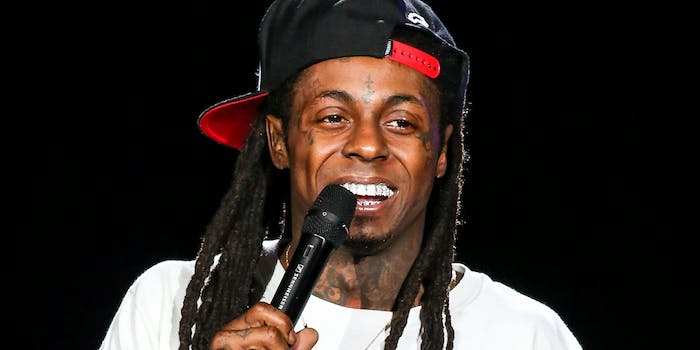 Lil Wayne’s ‘Uproar’ challenge is all the rage on Instagram

The hot new song is a viral dance—and everyone’s busting a move.

A new viral challenge has swept through Instagram, featuring rapper Lil Wayne‘s new song “Uproar.” The Uproar Challenge was started by producer Swizz Beatz, who reposted a video from Cousin Skeether on Instagram and encouraged others to share their own versions of the dance, according to Rolling Stone. More than 5,500 recent posts contain #uproarchallenge so far.

What is the Uproar Challenge?

“Uproar” is built for a backyard BBQ dance-off. And that’s the whole of the recent challenge: Finding spontaneous settings in which to bust a move. (In the videos below, participants break-dance at the shop, while sitting on a parked car, or popping out of the closet.)

The cutest #UproarChallenge video by far was shared by Lil Wayne himself, which depicts he and his children getting down to the catchy song.

The music throws back to the days of the “Harlem Shake,” prompted in part by Swizz Beats, who “reimagined G. Dep’s ‘Special Delivery’ for Lil Wayne’s ‘Uproar,'” according to Hot New Hip-Hop. It’s a built-in banger:

Shiggy, the Instagram comedian who started the “In My Feelings” challenge which blew up and subsequently helped Drake seize a No. 1 on the Billboard Hot 100 charts for the song, also participated in the “Uproar” challenge. Shiggy posted the video to his Instagram page, theshiggyshow, over the weekend.

On Spotify, the song has become one Lil Wayne’s most popular, streamed more than 10.4 million times since its debut last week. It is hard to gauge how much the popularity of Lil Wayne’s “Uproar” is bolstered by the Uproar Challenge, but it’s a good week for the rapper who on Friday released Carter V after continued delays, and to critical acclaim.