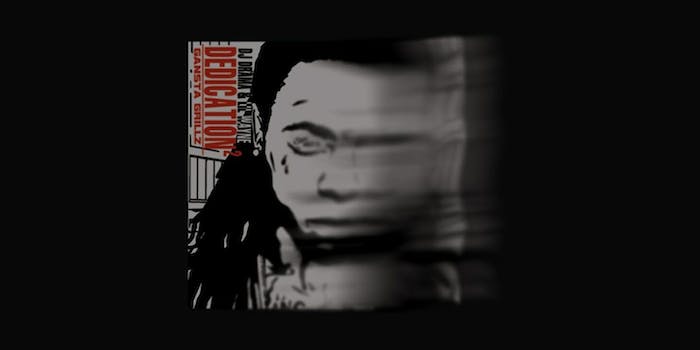 Legendary tapes are being left behind by Spotify.

It is strange to hear DJ Drama talk about erasure, especially considering how long he ruled the world. There are precious few people who knew what it was like to be in the room during Lil Wayne’s legendary mid-’00s opus years, and fewer still who had the privilege of personally offering up the beats for his consumption. Drama was never a star player, but he was the perfect mixtape liaison; a behind-the-scenes hype-man silently feeding the Best Rapper Alive until the rest of us believed his boasts. It sure is wild to consider how all that history is being moved closer and closer to the margins in the subscription-streaming epoch. The out-the-trunk philosophy Drama thrived on is not friendly with the copyright mandates handed down by venture capitalist conglomerates and, unfortunately, that means you can’t find any of those prime Lil Wayne mixtapes on Spotify. There are some days where this is annoying and others where it feels like an outright crime.

So, I ask Drama if he wishes that his classics were more discoverable in the modern era; if he’s at all worried about maintaining his legacy, as the years pile on and a bastion like Datpiff fades into an old-head memory. “100 percent,” he snaps back.

“It’s gonna take some due diligence. It’s gonna take someone to step in and get it done. Because there are so many clearance issues on some of those tapes based on the producers or the splits or the instrumentals not belonging to me or Wayne,” continues Drama. “It’s a lot of paperwork, but it can be done.”

It’s a little ironic that the icons of the mid-decade mixtape boom find themselves victimized by the music industry’s format wars. The tables have truly turned. In so many ways, Drama’s work with Wayne was the ultimate indictment of the retail paradigm— proof that one of the biggest stars in the world didn’t need to actually sell albums in order to thrive. Eventually, the business caved to Drama’s way of thinking, and the music was made free and accessible to anyone willing to plunk down 10 bucks a month. No longer did we nurture iTunes libraries filled to the brim with our collection, and no longer were we downloading and dropping badly encoded mixtape files directly into our hard drives. Wayne and Drama won. The gatekeepers are dead. But for the first time ever, their school of media saturation doesn’t fit the times, and the best work they did together is not available in the places where everyone listens to music.

This is frustrating, particularly because there’s not really a conspiracy against people like Drama and Wayne. Instead, one of the most important and influential periods of hip-hop history has been accidentally excluded from streaming services, simply because the math and legalese are too hard to decipher. There are so many dangling threads, so many cash considerations, so many samples to clear, and so many people to ask for permission, that unimpeachable records—truly some of the best rap albums of all time—have been expunged from the national ledger. Seriously, open up your streamer of choice and look. You won’t be able to find Clipse’s We Got it 4 Cheap, or Nicki’s Beam Me Up Scotty, or Rick Ross’ Rich Forever, Das Racist’s Sit Down Man, or Earl Sweatshirt’s Earl. That’s a huge oversight for music history, and Tunecore, an independent music distribution service, does not come off particularly optimistic when I asked them how much work it might take to groom an old Drama tape to be kosher for Spotify.

“We can’t give legal advice but, in general, there are definitely challenges one might want to consider—most importantly acquiring permission from all stakeholders to distribute and collect revenue on releases. If we’re talking about high-profile artists, you can bet all producers, contributors, and anyone being sampled are going to want in on the action,” the company said to me in a statement. “You are likely to run into issues with digital distribution if you’re not able to show that all rights have been properly cleared, including features and samples and beat usage, so we encourage anyone interested in this sort of venture to consult with a lawyer.”

The most important thing to note here is that mixtapes, in the traditional street-level sense, were never released with a profit margin in mind. Meaning: Wayne and Drama weren’t pulling residuals from every Datpiff download. (Which is bizarre to think about in 2018, where every click is monetizable and Chance the Rapper can pull down six-figure sums for an exclusivity contract over what was, at least in name, his third mixtape.) Instead, what made these tapes radical, and legally solvent, was the charity inherent in their DNA. Wayne was giving out this music for free, so when he brutally stomped all over “Black Republican,” neither him nor Nas was earning a check. That would be different if Da Drought 3 suddenly migrated to Spotify. For the first time ever since its 2007 release date, the tape would be a piece of capital, and the vultures would immediately swarm.

“To do it properly, some of the major challenges that an artist could theoretically expect to face in this situation would be reaching out to all copyright owners involved, getting permission, and negotiating writer splits—and that’s just the beginning,” continued Tunecore. “Labels that own the original master copyrights—just one part of the copyright story—have leverage in negotiations. An artist or label handling negotiations have to ask themselves how much all this is worth the trouble and costs. No detail can go overlooked as far as distribution goes; all documentation will be expected to be provided.”

Classic mixtapes remain internet-accessible. Datpiff has a robust streaming platform (last month it came in the clutch when I needed to play Drake’s So Far Gone banger “November 18” at a party), and some of these mixtapes exist on YouTube in a variety of audio quality. There are also some tapes that do make the jump to streaming services, like Joey Bada$$’s seminal 1999 which just debuted on Spotify. But it’s flabbergasting to consider how quickly these tapes have slipped through the cracks in such a short amount of time. We always underestimate how wide and trepidatious the internet’s memory hole can be, and it’s especially concerning when you consider how many young rappers right now are thriving solely off of a SoundCloud profile—which itself appears to be a company that’s had a long, tenuous history. Lil Pump’s seat-of-the-pants singles might be ubiquitous right now, but then again, I thought the same thing about Dedication 2.

“My advice to this generation would be to get a big external hard drive and with every single session, everything you record, immediately go to the engineer and say, ‘Dump that into my hard drive,’” says Clinton Sparks, another DJ and producer who came up during the boom. “When you’re creating history you don’t know it in the moment. When I was doing everything I was doing, I was so busy working that my head was like, ‘Throw it out, throw it out, throw it out,’ I never looked up to smell the roses.”

I floated the same question to Drama, asking him for the wisdom he might share to the kids who were in his shoes 15 years ago. His take is a little different. After all, this is a man who remembers a time when copping a mixtape meant buying an unmarked CD outside of a barbershop or a record store. “Gangster copies,” as he describes them, a far cry from a Mediafire link. The availability of his music might not be centralized by a streaming conglomerate, but it’s still plenty egalitarian, which is what made him famous in the first place.

But more importantly than that, Drama seems to imply that there’s a fundamental ephemerality to the nature of the mixtape. That, maybe, these records were supposed to be a little fleeting. I tend to agree. Think about Wayne running roughshod over a calendar year’s worth of hot beats, methodically putting every other rapper in their place. That is not the sort of thing that’s done with foresight or commercial accountability. No, that’s instinct. That’s rap music. A constellation of hype, anger, and envy, filling in the cycle before the full-length studio statement. So maybe it’s OK that those ancestral mixtapes age into a sense of scarcity. After all, according to Drama, the “industry” part of this industry should be the last thing on any hungry rapper’s mind.

“I would almost say, as much as you can protect yourself and you have the right agreements when it comes to your production and the originality of your product, hip-hop is built upon getting music out to the people and becoming a phenomenon from there,” he finishes. “I wouldn’t want kids to overthink the business. It’s important to be knowledgeable, but it’s music. It’s about creativity. You want to be heard, first and foremost. It’s hard for me to give advice now, at 40, thinking about what I was doing back in those days. I was just doing what I loved to do.”