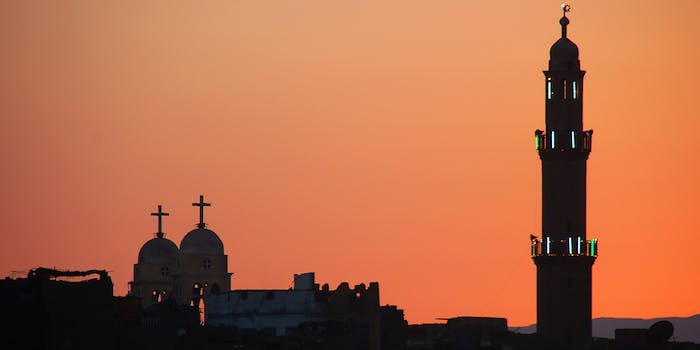 Understanding Islam and the death penalty

Here are five points to consider about Islam's complicated relationship with the death penalty.

Last week a Saudi Arabian court sentenced Palestinian poet Ashraf Fayadh to death for apostasy — the deliberate renouncement of Islam. Human rights advocates across the world rallied to his cause and as the Daily Dot’s Aaron Sankin reported, “Fayadh’s fate quickly became a cause célèbre on social media, with a litany of Twitter users gathering around the hashtag #FreeAshraf to protest his death sentence.”

Under the Wahhabi interpretation—an austere, literalist sect of Islam associated with the 18th century preacher Muhammad ibn Abd al-Wahhab and the Saudi royal family—crimes such as blasphemy and apostasy are punishable by death.

Fayadh’s case is not an isolated one. Liberal author Raif Badawi was publicly flogged in January in Saudi Arabia and remains in prison after being convicted of blasphemy. There was an international outcry as many decried the juxtaposition of such a penalty with international conceptions of human rights, freedom of conscience and speech and the value of religious pluralism.

To compound the commotion, the Pew Research Center released statistics in 2013 that broad support for death penalty for apostasy in Asia and the Middle East. In Egypt (86 percent), Jordan (82 percent), Afghanistan (79 percent), Pakistan (76 percent), the Palestinian territories (66 percent), and Malaysia (62 percent). And nations like Kazakhstan (4 percent), Albania (8 percent), Indonesia (18 percent), and Tunisia (29 percent) show minority support for such punishment.

People across the world wrestle with the serious questions these situations and statistics provoke. The attendant discussion and dissent that emerges around these reports often exacerbates the conception that Islam and the West are locked in a perennial “clash of civilizations” where one stands for the Enlightenment ideals of freedom and justice and the other for pre-modern barbarity and despotic conformity.

While there are grave reasons to challenge the decisions of the Saudi courts to condemn these men, there is a concomitant danger with condemning an entire religion or casting dispersion toward Muslims for such stats and scenarios. The numbers alone can be misleading.

There are five points to consider before coming to any clear conclusions:

1) A tradition of ‘contradictions’

Talal Asad, an anthropologist at the CUNY Graduate Center in New York, wrote that Islam is “a discursive tradition”—a set of religious symbols that take on meaning, value and expression in various social and political situations where multiple processes, discussions and negotiations are involved. Still, this does not quite represent how Islam—in all its complexity and conceptualizations—can be downright contradictory. As Shahab Ahmed intimated in his book “What is Islam?” the main challenge in interpreting Islam is coming to terms with the considerable diversity of beliefs, practices and postures within Islam while simultaneously appreciating that there are shared principles which act as a cri de coeur for Muslims across the world.

The uncomfortable truth is that essentialized conceptualizations that say “Islam = violence” or “Islam = peace” are insensitive to the alterations and negotiations that characterize lived Islam in interaction with myriad Muslim constituencies and non-Muslim actors in places like Saudi Arabia, Southeast Asia, the Balkans and even Latin America and the Caribbean.

Within the discursive traditions of Islam there are vociferous debates about the theological legality of taking the life of those who leave Islam. These negotiations span both classical interpretations of the Qur’an and the Hadith—the collected traditions of Muhammad—and extend into both progressive and conservative individual readings (ijtihad) shaped by modern contexts.

While the Qur’anic passages most often cited in reference to this punishment are ambiguous at best, there are most certainly hadith that state, or imply, that the penalty for apostasy is death (see Sahih al-Bukhari 52:260 and 83:37).

At the same time, the Quran repeatedly mentions freedom of conscience as one of its fundamental tenets. They read, “there is no compulsion in religion (2:256),” and “let him who will believe and let him who will disbelieve (18:29).” Belief, in these ayahs, is referred to as a matter of personal, free choice.

Whether or not the texts of Islam uphold such a punishment or, as some scholars suggest, the tradition was borrowed from texts and traditions that pre-dated Islam, is far from certain and the Saudi/Wahhabi interpretation is not the sole opinion.

Furthermore, the politically charged contexts and sociological allegiances of Saudi Arabia and other nations who uphold such laws must be considered. The critical questions here are: what does apostasy mean politically; what is its social significance; and its effect economically?

The answer to these rhetorical questions is that apostasy has meaning beyond the religious realm and the issuing of the death penalty for it is not solely a “religious” issue, but part of a socio-political and economic nexus wherein being Muslim and being a member of the state and/or kingdom are one and the same. Those in power who uphold punishment of this sort often do so to suppress political dissent rather than to enforce religious belief and practice. Similarly, citizens who support such retribution are not only reacting from a position of piety, but are responding to deep-seated fears concerning the rupture of their social fabric and the crumbling of structures of legitimization that provide them with a sense of security amidst highly uncertain socio-political contexts.

Therefore, we cannot interpret these stories as clear-cut evidence of the characteristics of Islam. Instead, the statistics and the stories must be situated within their broader socio-political context.

The 2013 Pew report found that among Muslims who say Sharia should be the law of the land, most don’t favor the death penalty for those who convert. Indeed, there are movements to counter this very idea and they far too often go unreported. This leads to misperceptions and misrepresentations of Islam and Muslims’ stances on human rights.

Muslim leaders from across the world have helped draft and sign multiple religious freedom charters. Scores of Muslims not only live in a context of religious pluralism and switching, but understand it as an established social fact of a digitalized, global, and rapidly changing age.

There are even particular Muslim political frames that ascribe to philosophies and practices of democracy, universal conceptions of human rights, individual faith and piety, liberty and freedom of religion. This is what scholars such as Asaf Bayat, an Iranian professor at the University of Illinois, and others call “post-Islamism.” I refer to it as “alter-Islamism”—an alternative form of Islamist politics and practices that seek to merge the ideal of an Islamic state with the mechanism of democracy and advocacy for individual and corporate rights (e.g. Turkey’s AKP party, Ennahda in Tunisia, etc.). While this goal is far from perfect, it cannot be neglected.

5) Critique the numbers, go beyond

Finally, the Pew statistics seem to suggest that a majority of Muslims in large countries, and in multiple regions, favor stringent punishments for religious switching. These numbers need to be interrogated.

The statistics show that the majority of Muslims in several nations (Egypt, Jordan, Malaysia, etc.) support the death penalty for apostates. However, it must be noted that the percentages were taken from those who already favor shari’a as the law of the land (which is diffuse in its interpretation as well, see the work of Abdullah An Na’im). This makes a massive difference.

For example, the numbers show that 86 percent of respondents favor shari’a in Malaysia and 62 percent favor death penalty for apostasy. When you combine these percentages it reveals that only 53 percent of Malaysian Muslims surveyed support the death penalty for apostasy. Similar percentages emerge when the math is borne out in the Egyptian, Jordanian and Palestinian contexts.

Although these are still majorities, the statistics actually show that nearly half of respondents in each of these nations do not support the death penalty in these cases. This undergirds the point above that interpretations and applications of this “law” are far from settled, even in the most politically framed and Muslim majority nations surveyed.

Most importantly, however, it is imperative that our opinions concerning Muslims—and Muslim-majority nation-states—should not only be informed by quantitative data, but should be textured, nuanced and softened by qualitative experiences.

This means we must get to know our Muslim neighbors, co-workers and associates. In the context of these relationships we will see that Muslims are more than numbers, far more diverse than the headlines that hem them into narrow comprehensions in the Western imagination, and often are far more similar to us than we would like to admit.

In the meantime, let us keep Ashraf and others who have had their human rights violated in our thoughts and prayers even as we are sure to not subvert the human rights we claim to support by letting fear, sensationalism and unclear data disfigure our perception of a large, varied and diffuse religious tradition such as Islam.

Photo via David Evers/Flickr (CC BY 2.0)