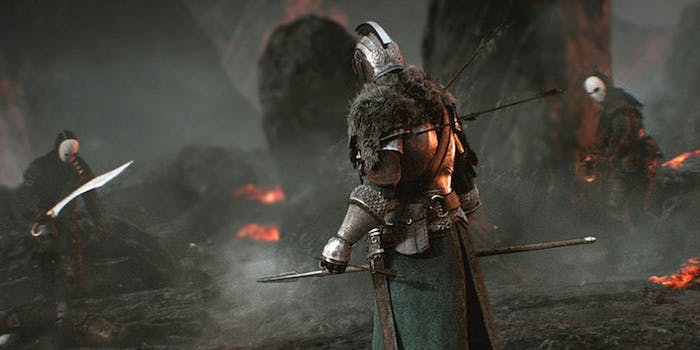 The media would like to think that Dark Souls can drive a kid to murder.

As far back as the Columbine shooting in 1999, the media have sought to tie violence among youth and in schools to shoot-em-up video games. Fifteen years later, despite countless refutations of this flawed logic, journalists are once again raising the specter of dark digital fantasy in connection with a horrendous on-campus attack—one that left a teacher dead.

Here’s a smattering of the moral-panic-driven lead paragraphs in the latest articles about the stabbing murder of 61-year-old Spanish instructor Ann Maguire at Corpus Christi Catholic College in Leeds, U.K., allegedly carried out by her teenage student in front of an entire class:

“The 15-year-old accused of stabbing to death his teacher chose to sit alone in lessons and was a fan of online video games, classmates said today,” the Daily Mail reported.

“The boy accused of stabbing teacher Ann Maguire to death was hooked on violent video games, it was claimed today,” said the Daily Record.

“Downing Street has said that it will do everything possible to prevent a repeat of the murder of Ann Maguire, as it emerged that the teenager accused of stabbing her is a fan of a violent video game marketed with the slogan ‘prepare to die,’” was the Telegraph’s sober take.

But was this hobby really the most pertinent fact about him?

Keep reading these articles and you’ll find that the accused, in addition to being a fan of Dark Souls and Grand Theft Auto, suffered from intense bouts of depression, was routinely bullied, had threatened or attempted to commit suicide, and considered himself an outcast—a host of factors that predict criminal or violent behavior far better than membership in Achievement Hunter, an online gaming community.

(Note, too, that most of these reports make mention of his interest in thrash and heavy metal music, another boogeyman for social conservatism.)

Isn’t it far more likely—as reporter Dave Cullen suggests in an interview on Columbine, his definitive account of events surrounding the high school massacre—that a troubled mind is attracted to these homicidal forms of entertainment, rather than shaped by them?

“I’m always a little skeptical … because causality is hard to prove. Just because you see a link statistically between a higher percentage of people liking violent video games is that cause or effect?” Cullen wonders. “Maybe violent kids like these violent games because they embody their fantasies.”

Sadly, those reporting on a tragedy like this tend to sweep the issue of mental health under the rug and linger over externalities that have little or no bearing on the matter at hand. Yes, the teenage suspect’s online footprint will play a part of an ongoing police investigation, but mentioning that he “even had a drawing of the Grim Reaper as the banner on his Facebook page” does a sharp disservice to any reader trying to understand what truly motivated this act.