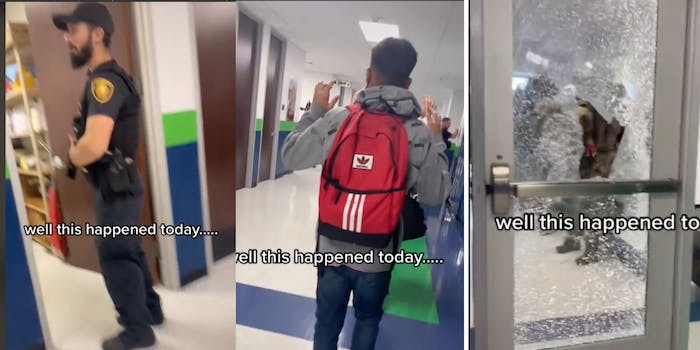 ‘Why is this still happening man’: Student film aftermath of school shooting in viral TikToks

The shooter was reportedly a former student.

A man has been charged in a school shooting that injured the principal and went viral on TikTok after students posted behind-the-scenes videos of the lockdown.

The incident has not been widely discussed, even with the TikToks going viral, making people wonder why it isn’t being featured in the news more. Many think it also speaks to the “normalcy” of school shootings in America.

Ex-student Dexter Harold Kelsey, 25, confessed to the shooting Friday at YES Prep Southwest Secondary. He was charged with aggravated assault against a public servant and deadly conduct in the shooting, Houston police said Saturday.

Only the principal, Eric Espinosa, was injured; he was grazed by a bullet. He was treated at a hospital and then released, reported Chron.com.

Espinosa was trying to warn staff and students when he was shot. While everyone fled the school, officers arrived and arrested Kelsey.

The site also said that according to Harris County Hearing Officer Cheryl Diggs, Kelsey was originally targeting a female staffer at the school, who he posted about on social media.

In a video, TikToker and student @melikepussc taped themselves and other students filing down the school halls, raising their hands as they pass by several armed officers who are posted throughout the building.

The end of the video shows a shattered door and blood splatters on the floor.

“This turned so common you don’t even see it in the news anymore,” commented @itsabetch.

“Why is this still happening man. It’s such a common thing that you barely see stuff like this trend anymore…” wrote @brianbpineda.

In a follow-up video, the TikToker shares screenshots of the shooter and his writings on social media in which he incoherently discusses past incidents at the school and calls out certain people by name.

It also shows Principal Espinosa’s photo in an Instagram post by KHOU11, in which the caption says the school’s classes will be canceled until Wednesday this week.

YES Prep issued a statement on Twitter that reads in part:

“We recognize Friday’s violent incident at Southwest is still evoking many emotions…You don’t have to cope with this alone. There are counselors ready to follow up with students needing support. Please reach out if they need someone to talk to.”

According to Chron.com, Kelsey is still in jail with a bond set at $5.25 million.