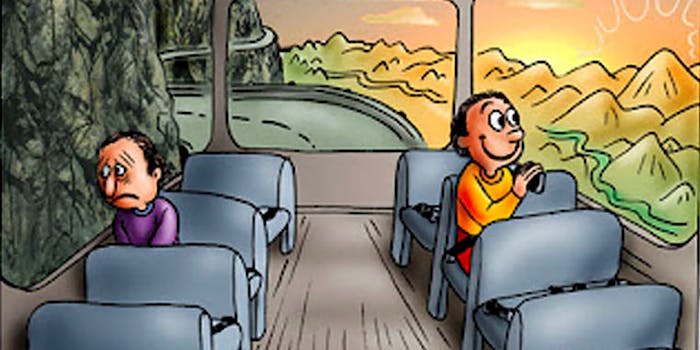 What is the ‘two guys on a bus’ meme?

An inspirational 2013 cartoon depicting two men on a bus is circulating on Twitter, where people are playing with the definition of inspiring.

According to Know Your Meme, the cartoon is from Brazilian artist Genildo Ronchi, who uploaded it to his website in August 2013. It depicts a man looking out the window at the sun and mountains, smiling, and a man across the aisle, frowning at his view of a rocky grey wall. The original cartoon included the caption “As vezes só depende de nós,” which translates to “Sometimes it just depends on us.” Alternately, the cartoon has circulated with the caption, “Every single day you make a choice.”

In the week since, it’s spread on Twitter, where people got a little more creative with the cartoon’s format.