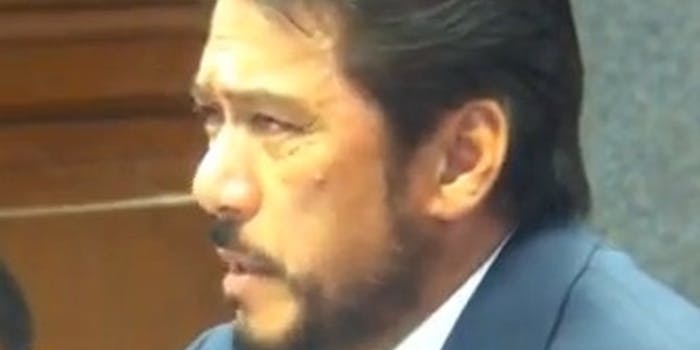 Twitter users are having the last laugh at Senator Vicente (Tito) Sotto III, who's been accused of lifting lines for a speech from a blogger.

A ruckus erupted in the Philippines last week when Senator Vicente (Tito) Sotto III was accused of plagiarizing a blogger in a speech. Now, Filipinos have voiced their anger by tweeting out lines from famous songs and movies and attributing them to the beleaguered politician.

During a speech in which he criticized a contraceptive health bill, Sotto seemed to use language that appeared on the blog of Sarah Pope, who writes under the guise of the Healthy Home Economist.

Sotto denied that he’d plagiarized the work, though his staff confessed that parts of the speech were lifted from her blog. Pope slammed Sotto for not owning up to the error, suggesting that he should be “man enough to say ‘I’m sorry’ and then just move on.”

A week later, the row still rumbles on, with Filipinos protesting Sotto and his remarks on Twitter. Using the hashtag #SottoPlagiarismProtest, users are giving credit for all sorts of historic quotes, pulled from songs, movies, and history (Filipino or otherwise).

The hashtag has used more than 4,150 times since Wednesday, according to Topsy, and it became a trending topic in the country. Things like Vincent van Gogh’s Starry Night and lines from Titanic were noted as being created by the apparently multitalented Sotto.

Philippines news outlet Rappler pulled together some of the best responses in a Storify.