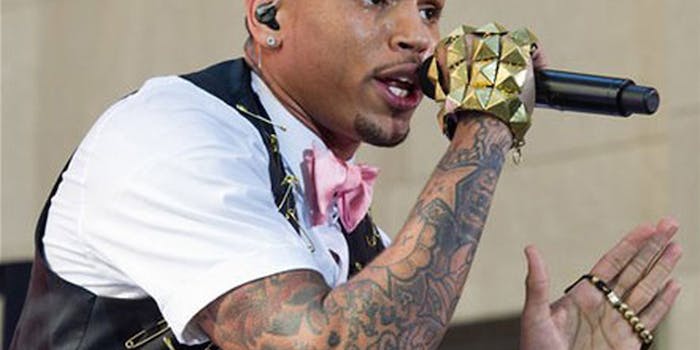 What do Soulja Boy, Drake, and Chris Brown all have in common—besides their musical careers?

In the last year, all three have been the subject of more than 60,000 tweets falsely claiming that they died. Today, Brown was just the latest casualty.

Psychologists, sociologists, and digital-communication specialists believe the rumors start for two reasons: Twitter’s ease of use and tweeters’ obsession with status.

Rumors of  Brown’s death on Twitter started Wednesday morning after the recent Grammy Award winner bragged about his new statue on the microblogging site. (He has since deleted the tweet.)

In apparent retaliation against Brown, who was convicted of assaulting his ex-girlfriend Rihanna in 2009, angry tweeters spread false rumors of his death, collecting more than 20,000 mentions in the last 24 hours.

The tweets reached a crescendo this afternoon when parody account @grandadjfreeman sent the following message in response to the Brown rumor: “RIP Chris Brown? Twitter has killed more black people then Hurricane Katrina.”

That message was retweeted more than 1,200 times and got tweeters asking, what’s the deal with all these death rumors?

“How do we get status on say Twitter? Well, by retweets and followers,” said Dave Brodbeck, a psychology professor at Algoma University in Ontario, Canada.

“So, if you are the first to break something big, you will get mentioned on the news, on podcasts, and you will get more followers. Now, why do people post knowingly fake stuff?  That is another question. Maybe it is a guess, and they figure, ‘Hey, I’ll get in on the ground floor of this, and get more followers etc.’  People may just be doing it for the ‘lulz’ as well—you know, like a prank phone call.”

Such pranksterism seemed to be the motive for recent false rumors about viral-video star Tay Zonday.

Being in on the ground floor of a big news event gets attention. For example, included in Twitter’s Top 10 tweets from 2011 was one from a man in Abbottabad, Pakistan, who unknowingly witnessed a U.S. Navy Seals helicopter participating in the mission that led to the death of Osama bin Laden. That tweet was considered the first report on Bin Laden’s capture and death.

On Saturday, Whitney Houston’s death was first tweeted by Brittany Pullard (@barbeebritt) of California, nearly 55 minutes before the Associated Press confirmed her death. That foresight has gotten the college student mentioned in articles on Mashable and Mediabistro.

Going along with this desire for status is tweeters’ lack of inhibition when it comes to factchecking, said John Jones, a professor at West Virginia University who teaches writing, rhetoric, and digital communication.

“I found out so quickly that I initially was unable to verify the report online,” said Jones. “Because of this, I think Twitter users are inclined to give a lot of credence to news they see on the site. Of course, this means that it is possible for people to spread ‘fake’ news on social media, and, unless users get in the habit, as I did with Jobs and Houston, of verifying those messages before forwarding them on, it leads to a situation where fake news is disseminated widely online.”

The one consolation is that relatively few people turn to Twitter as a news source for more serious topics like politics. But as Twitter use continues to grow, that will inevitably change.

And it only takes a few people—and 140 characters—to start a rumor.