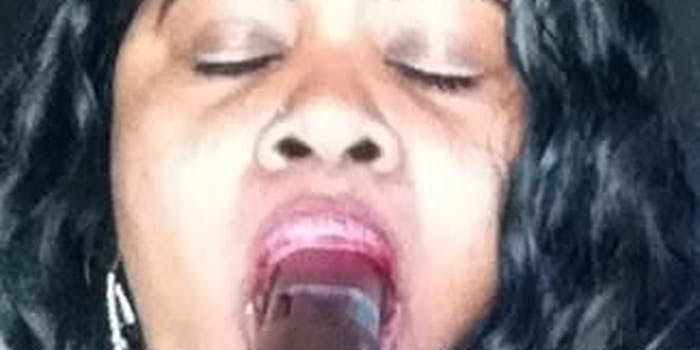 Officer Angelica Robinson apparently tweeted a photo of herself with a gun in her mouth in response after an alleged clash with Chief Ralph Godbee.

A Detroit police chief’s romantic affairs ceased to be his own business when his subordinate and alleged ex-lover posted a disturbing photo on Twitter.

Detroit Police Officer Angelica Robinson apparently tweeted a photo of herself with a gun in her mouth after she got word that Chief Ralph Godbee was attending a police conference with another woman. (The Daily Dot was unable to locate her Twitter account, and no news outlet has posted it.)

Robinson’s attorney, David Robinson, told the AP the relationship between his client and Godbee began in 2008, before Godbee had been promoted to chief. Both parties were, and continue to be, married to other people.

“There was a sexual relationship between my client and Godbee,” Robinson told them. “She was trying to end the relationship, and Godbee didn’t want to let it go.”

Robinson’s claim doesn’t explain his client’s erratic behavior, going so far as to post a series of disturbing tweets before the photo.
While the local government investigates the claims, Detroit Mayor Dave Bing has put Godbee on probation.

Godbee was promoted to police chief in 2010 after Bing fired his predecessor, Warren Evans, in part for becoming involved with a female officer.