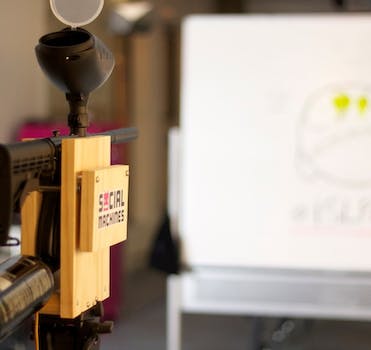 You can now fire a paintball gun just by tweeting

Creative agency iStrategyLabs has set up a paintball gun so it will fire when you use the hashtag #ISLPaint.

We’ve finally found the most important and useful thing Twitter has done in its seven-year history.

Creative agency iStrategyLabs has set up a paintball gun so it will fire when you use the hashtag #ISLPaint. When it receives such a command, it fires one of the painful pellets at a poor, defenseless whiteboard.

Alas, you may have to wait a bit before firing the weapon. iStrategyLabs says the PaintBot is offline for cleaning at the time of writing.

As Betabeat and DVice point out, there’s another catch in that there’s not a livestream of the PaintBot hurling the paintballs of doom toward their target. You’ll just have to take iStrategyLabs at its word.

There is a GoPro camera attached to the device, though, so maybe you’ll see the footage of your mischievous action down the line. In any case, here’s what the PaintBot looks like in action:

While we live in hope that PaintBot comes to market (hopefully mounted on a remote control car, and maybe replaced with a NERF gun to make it a little safer round the office), here are some other things a single tweet can do:

Those are all impressive enough, but they seem just a little less fun than firing a paintball gun. Kersplat.