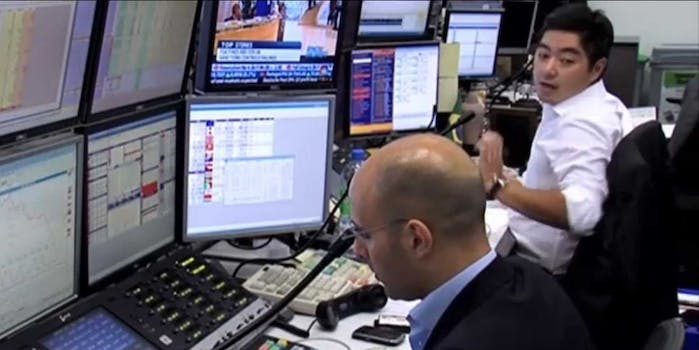 The SEC and the Commodity Futures Trading Association are looking into the tweet that tanked the Dow Jones Tuesday.

At first glance, it might seem odd the Securities and Exchange Commission (SEC) and the Commodity Futures Trading Commission (CFTC) are looking into a Twitter hack, but both agencies, along with the FBI, are investigating an attack on the Associated Press’s main Twitter account this week.

Hackers sent just one tweet—a false report that President Obama had been injured in an attack on the White House—before Twitter suspended the account. But the damage was already done, as that single tweet briefly sent the Dow Jones index crashing, wiping out $136 billion from the stock market.

The tweet, apparently orchestrated by pro-Assad regime group the Syrian Electronic Army (SEA), was quickly determined to be a hoax, though one with very real consequences.

While the FBI is trying to determine the true identity of the perpetrator(s), the SEC and CTFC are looking into the effects on the market.

An SEC spokesman told The New York Times the agency looks at not only the catalyst for a market-shifting event like this one, “but also its repercussions, to determine whether any further inquiries or actions are warranted.”

The CFTC, meanwhile, is investigating trading in 28 futures contracts that took place during the five-minute period in which the market went into a nosedive. While markets and currency dipped drastically, at least for a few minutes, the value of gold seemed to remain stable.

It’s not quite clear exactly how the market crash occurred, though industry consensus seems to be the tweet triggered algorithms into selling off stocks and commodities, according to Bloomberg. It’s also worth noting that Bloomberg trading terminals started displaying tweets from a number of trusted sources earlier this month—ironically, that was meant to be a measure cracking down on false information that could shift markets.

The incident led to renewed calls for Twitter to introduce two-factor authentication. This means you’d need to include a temporary code sent to your phone when logging in to your account, making life much more difficult for hackers looking to gain access to it. While companies like Google, Facebook, and Apple have two-factor authentication, Twitter has held off to date.

A Wired report suggests that Twitter is internally testing two-factor authentication, with plans to make it available to users soon.

With the AP hack falling in the wake of Syrian hackers compromising the likes of the BBC, CBS News, FIFA, NPR, and Agence France-Presse, two-factor authentication can hardly come soon enough.