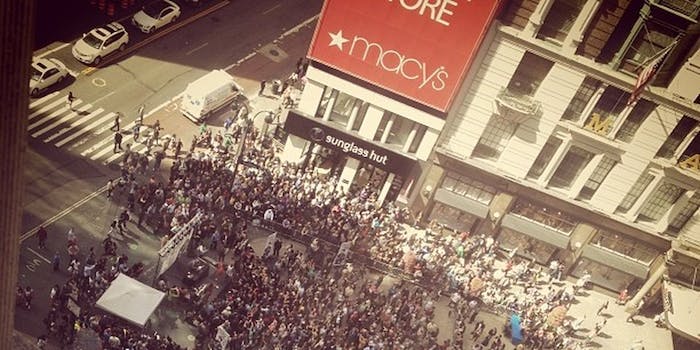 After today, if you’re eager to break the twerking world record, you’re gonna have a hard time.

After today, if you’re eager to break the twerking world record, you’re gonna have a hard time. Hip-hop artist Big Freedia brought 358 people into the middle of Manhattan and got everyone to simultaneously grind.

Twerking, for the uninitiated, is that ass-up, hands-down dance move you’re seeing everywhere. It began in Atlanta but is now more closely associated with Miley Cyrus. It takes a bit of space to pull off, which is why packing hundreds of people into one city block might have made things complicated.

On Sept. 25, Big Freedia announced his intention to set the world record for the most people simultaneously twerking.

Live in herald square bout to attempt to break the world record for twerking we live new york !

Precisely at noon, a crowd of hundreds people gathered in New York City’s Herald Square, mere steps from the famed Macy’s flagship department store. Vine and Instagram exploded as more and more people filled the streets. It was late September; the air was crisp and the sun was shining—ideal twerk weather.

Getting my Guinness World Record of Twerking on with #BigFreedia pic.twitter.com/CydhsUOPNY

UPDATE: Controversy in the twerkosphere. It appears the group twerking record was actually set last year, with nearly 2,000 people, and while it wasn’t picked up by Guinness, the lesser-known RecordSetter.com verified it. Could it be a real, bona fide Scandal in Twerktown? Maybe—unless this all gets settled by setting a new record.