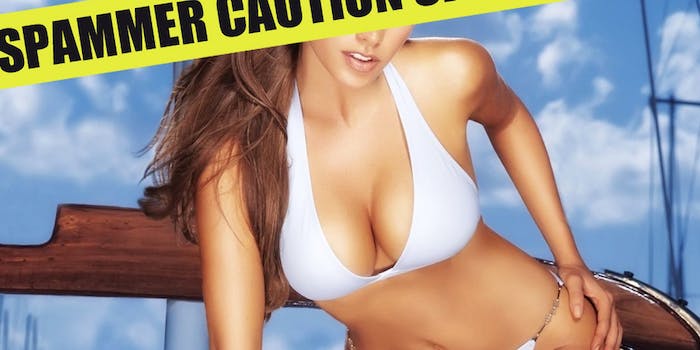 That new follower you have on Twitter might not be all that he (or she) is cracked up to be.

You’re eyeing your latest Twitter follower and something looks strange.

@WesleyKrider200 has a male sounding name, but the profile photo shows a seductive woman in a bikini.  You check out some of the tweets, and they’re all “Make Money Online!” links that you wouldn’t touch with a glove made out of Norton Anti-Virus.

If you’ve been on Twitter longer than a week, you realize you’re looking at a spammer.

Spammers have been around since the dawn of the Internet and they’re not going away anytime soon. The payoff for spam is simply too good to resist. In short: spam makes money.

“Spam, even Twitter spam, is just another form of advertising.”

That’s what Charles Hooper said about his 2009 experiment spamming Twitter with a bot. Unemployed and bored, Hooper opened up a Twitter account and built a spam bot, an automated program, to send unsolicited links to other users.

His account, @ThaBookie, linked Amazon book titles in tweets to users. If users ended up purchasing the book, a percentage of the sale went to Hooper’s Amazon Affiliate account. The program took less than a weekend to develop and netted Amazon more than $7,000 (with a $400 commission for Hooper) before Twitter banned his account.

“I’m pretty open about the fact that I spammed Twitter for a period of time,” he said. “I even mention it in job interviews when it’s appropriate.”

Now employed as a freelance Linux systems engineer, Hooper is not your typical Twitter spammer. However, he’s a knowledgeable authority. So what’s trending on Twitter when it comes to spamming?

Bots are big, according to Hooper. One spammer can easily set up bots to respond to keywords or trending topics. Have you ever noticed that when you tweet the word “iPad,” your mentions from spam accounts shoot up? Hooper said those are likely bots programmed to listen for that keyword.

“If you tweeted the word “book,” back when I ran my Twitter bot, there was a chance you would receive one of my spam advertisements,” he said.

The difference between Hooper’s bot and the usual spam bot is the level of customization. His bot suggested books based on interests, but many bots, he said, will recommend Viagra to users whether or not they’re likely to want it.

“Most just broadcast the same ad to anyone and everyone,” he said.

Hooper really does mean everyone. Aprofessional spammer would likely have hundreds of bots, he said. And the spam account mentioned earlier, @WesleyKrider200, probably had cousin accounts like @WesleyKrider201 and @WesleyKrider199.

“I would suspect that the ‘professional’ spammer would focus more on account status on a much larger scale, Hooper said. “For example, I think their question would be ‘How many accounts are running right now?’ versus ‘Is my account suspended or not?’” he said.

Hooper ended his bot “because I felt the project was ‘complete,’” he said. “When I first started it, the key driving force was writing a contextual spam bot and just seeing if it would work. After surviving for four months, I could undoubtedly say it did.”

If you’re sick of spam, see our story on how to prevent Twitter spam