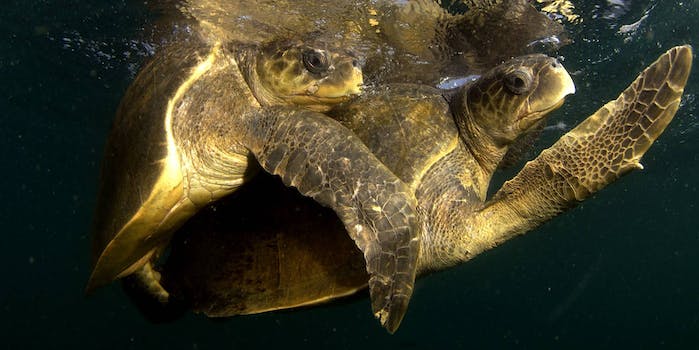 Drones have done many epic things that humans can only dream of doing. They’ve made pizza delivery savvy as hell, they’re saving the rainforest, and they’ve even taken chainsaws to the next level.

They’re also hands-down the best devices to use for some sweet scientific voyeurism.

A research team descended on the Gulf of Mexico recently to study the endangered Kemp’s ridley sea turtles. Not wanting to disturb the skittish sea beasts, the scientists deployed drones to capture their footage.

Needless to say, they got a bit sidetracked by all the green turtle copulation their drones captured instead.

Bevan, a doctoral student at the University of Alabama at Birmingham, and her research partner were the first to watch the turtles gettin’ busy.

The two researchers inadvertently set the scene by placing a black sheet over themselves to get a better look at their drone footage. That privacy screen was just enough to put the green turtles at ease.

Scientists have discovered that turtle courtship is pretty much just like hooking up at a honky tonk: turtles dance around each other poorly, get a bit feisty, and then awkwardly kiss. In the turtles’ case, they rub throats. Depending on how much you’ve had to drink, you might also do the same thing while trying to score.

Scientists caught the turtles getting nasty a total of seven times. Special shoutouts to the two male turtles who were just looking to experiment and also tried to bang.

Researchers hope to buy an even better drone to further get in on the turtle sex action. They’re still trying to get a glimpse of Kemp’s ridley sea turtles in coitus, too.