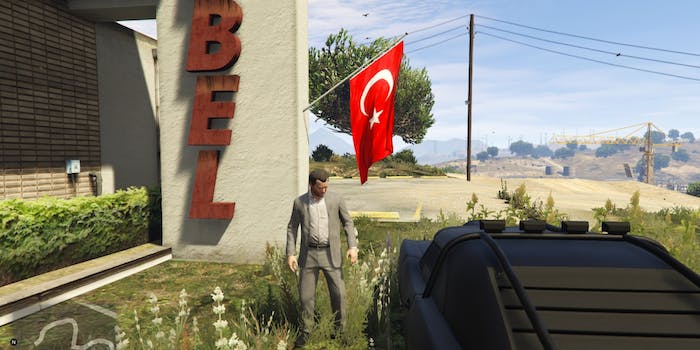 'Grand Theft Auto' players are more dangerous than anyone thought.

Imagine you had the magic ability to summon unlimited guns and ammo and then tried to overthrow a democratically-elected government. Not so good, right?

In the search to discover the truth behind the origins of the July 15 coup attempt, Turkish media dove into garbage supposedly thrown away by the coup plotters, the Gulenists (named after Fethullah Gulen, a Muslim cleric from Turkey who lives in rural Pennsylvania).

A bombshell of a news report on Turkish television revealed, among the Gulenist trash, the existence of secret codes that would have granted the plotters unlimited supplies of first aid kits, bulletproof armor, assault rifles, grenades, and RPGs.

That’s if they were playing Grand Theft Auto IV, anyway. The codes supposedly used by the coup plotters are actually phone numbers that players can dial on their in-game cellphones in GTA IV to activate game cheats like a free health and armor refresh, weapons, and vehicles.

Unfortunately, we’re not sure precisely what advantages these codes would have given the coup plotters because not all the GTA IV cheat code guides we looked at agree with one another, but it’s a good thing these guys didn’t have 359-555-0100 on the list, or they could have spawned unlimited helicopter gunships.