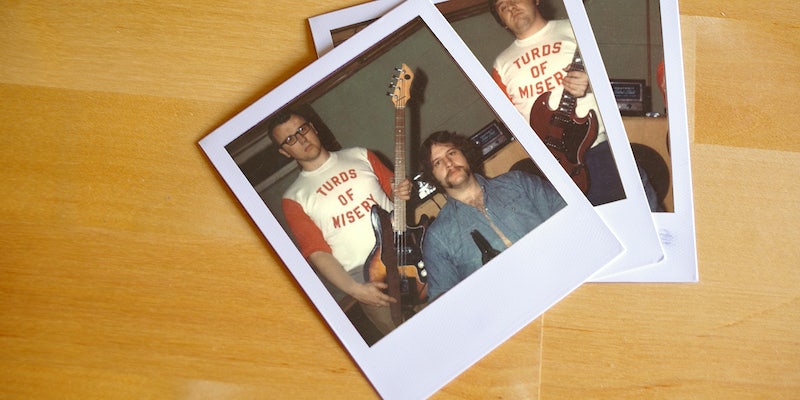 The magical legacy of Turds of Misery, the Internet’s favorite long-lost rock band

Say what you will about the Internet and how it’s destroying our lives. But sometimes it introduces you to your favorite new band, Turds of Misery.

The Iowa-based ’70s rock band was featured on Dangerous Minds back in 2012, and their origin story was fleshed out a bit. But it was their band photo that really captured the eye, causing Turds of Misery to become something of an Internet legend.

The blog Weather Station 1 wrote about the band in 2010, giving them a different, very tongue-in-cheek origin story. In the comment section, a woman named Laurie C. stepped in to set the record straight:

These boys aren’t Canadians. They’re from the Davenport, Iowa area. That’s my dad in the middle with the beer. His name is Dave, not Gord. Wade is on the right, and Wade’s brother on the left. They did an excellent cover of “Wild Thing”.

Fast forward to this past weekend, when the Twitter account @historyepics tweeted a photo of the band, and comedian John Hodgman commented on it. The Mountain Goats’ John Darnielle retweeted it.

“@historyepics: Turds of Misery, a 1970s rock band from Davenport, Iowa https://t.co/d5fh9bYtOD” it is SHAMEFUL these dudes didn't make it

And because the Internet can sometimes be a magical place, Laurie C. saw the photo and let the world know once again that the man in the middle is her father.

@hodgman @mountain_goats @historyepics That's my dad in the middle and I've got the tee shirt to prove it! pic.twitter.com/5h7GIdhHE3

Laurie C. is Laurie Cinotto, a Tacoma, Wash., author and crafter. She also posted a pic of her dad, who played guitar in the band, as proof of the Turds of Misery bloodline.

“I do google ‘Turds of Misery’ regularly to see what’s being said online,” Cinotto told the Daily Dot. “It’s interesting to see all of the ‘world’s greatest’ and ‘world’s worst’ lists that the band photo lands on.”

She also claims there was a fourth Turd in the band, but he wasn’t in the photo. So who were Turds of Misery?

“It’s hard to give solid, active dates,” Cinotto said. “But they started to play together in the early 1970s. Mostly they just played in basements, but at least once or twice, played at bars in the Quad-City area. Though all four ToM members don’t live close together, they do on rare occasion get together and play today.”

As for that Turds of Misery shirt, she said it was pure luck that she came across it.

“We thought the shirt was long gone, but a couple of months ago, when I was visiting my parents and helping them with a few house projects, I discovered it at the bottom of a duffle bag that was filled with other sentimental tee shirts,” Cinotto said. “I suppose because of their recent Internet fame, it may fall into the ‘collectible’ category. Because of that, we’ve got it in a safe place. I joke with my dad that the shirt is my inheritance.”

Cinotto has a sense of humor about the Turds of Misery legacy, even when she sees misinformation circulating online about the band.

“Sometimes when I see misinformation being spread I’ll step in and get the facts straightened out, but often I just let it slide,” she explained. “It’s so funny that there’s so much myth and mystery surrounding these guys. And how strange this band gained their fame because of a single photograph of them, and not the music they made.”

Photo by Lali Masriera/Flickr (CC BY 2.0) | Remix by Jason Reed