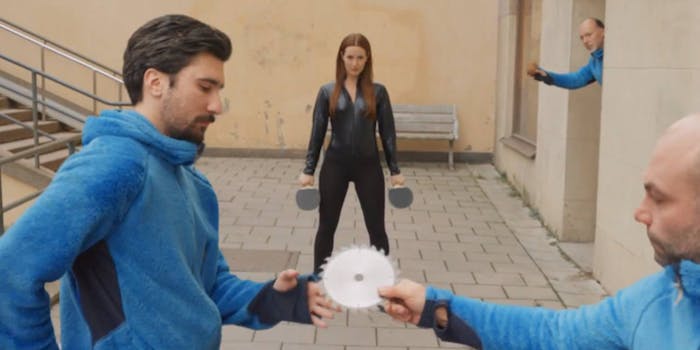 Captain Disillusion, the ball is in your court.

Back in September, the Tumba Ping Pong Show posted an almost too good to be true trick video which involved a man throwing knives towards a woman holding Ping-Pong paddles. He also sliced a pineapple off her head.

The Internet was skeptical, and two months later Captain Disillusion dissected it frame-by-frame, revealing just how the channel pulled off the fake (but clever) trick.

But now, the Tumba Ping Pong Show has fired back—and this time they’ve got hammers and circular saws.

They even throw in a nod to Captain Disillusion at the end. Whether they didn’t take too kindly to the debunking or it’s a friendly challenge for him to disprove this one as well is yet to be seen. It could even be a little bit of both.

But now that people know what to look for (per the first video), it’s a lot easier to spot what has been Photoshopped out or what weapons and fruit were dropped on the ground instead of actually chopped.

Even if Captain Disillusion doesn’t respond right away, the Internet has his back.