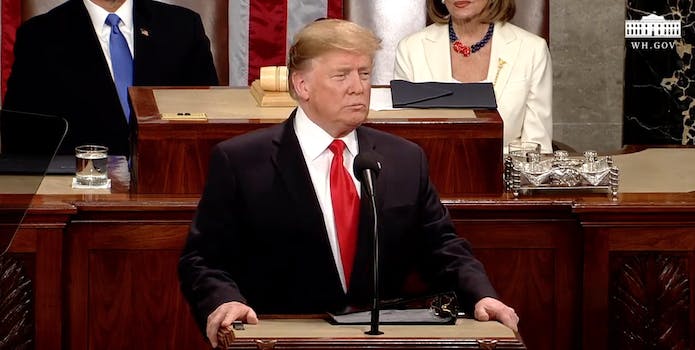 It was left of center.

President Donald Trump arrived today at the Capitol to deliver his annual State of the Union address. In a release before his speech, the White House said Trump would call for a new, bipartisan plan for the country.

“The agenda I will lay out this evening is not a Republican agenda or a Democrat agenda. It is the agenda of the American people,” an excerpt read.

And yet, all everyone could talk about was his tie. Because Trump waltzed into a joint session of Congress, and his neckwear was a bit askew.

Trump is wearing his tie like a sash tonight. Interesting. #SOTU pic.twitter.com/LORzprdnTW

Left Shark escaped from the Super Bowl and took over the tie.

Trump's tie is off kilter

As the speech has worn on, Trump’s tie pivoted somewhat back to center.

But for a brief 20 minutes, Trump was leaning left.