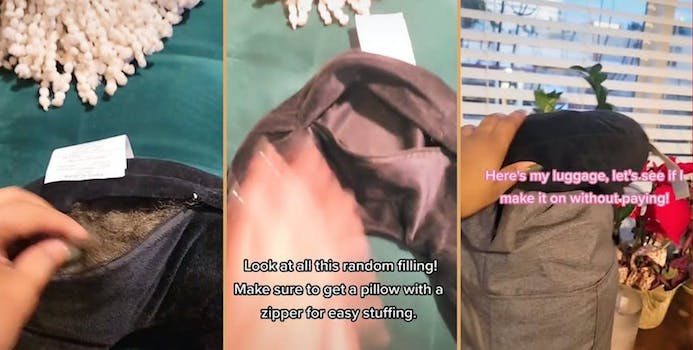 'Everything fit! Except for this shirt.'

A TikToker has gone viral for sneaking clothes into a travel pillow to avoid paying for budget airline carry-on fees.

“My flight is in 3 hours let’s see how this goes!,” Ayo (@anayotothe) wrote in the caption of the video. Her TikTok received over 730,000 views since posting four days ago.

Several budget airlines such as Spirit Airlines have strict rules that require passengers to pay for carry-on luggage. Although each budget airline has its own individual luggage restrictions, several only allow passengers to bring a free personal item that fits under their seat.

Passengers are typically allowed to bring travel pillows in addition to their personal items if they intend on wearing them around their necks, but the rules vary depending on the airline and pillow size.

In her video, Ayo took the stuffing out of a $9 Walgreens neck pillow and stuffs it with clothing. A text overlay said, “Trying the Spirit and Frontier pillow hack cuz I ain’t tryna pay $60 for a carry on.”

In a follow-up, Ayo informed viewers that she made it on the flight with no problems.

@anayotothe Reply to @boricua.geek update on if I made it onto the flight w/o paying extra! #budgettravel #travelhacks #travelpillow #blackgirltravel #blacktravel ♬ Aesthetic Girl – Yusei

She also clarified why she went to the extra trouble of stuffing a pillow instead of buying a better plane ticket.