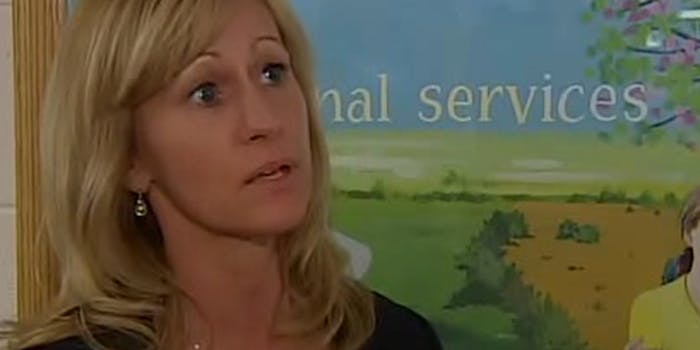 This Indiana high school is divided over a proposal for a straights-only prom, and they're taking the fight to Facebook.

For some people in Indiana, apparently gay is not OK.

Several students, parents, and teachers at Sullivan High School in Sullivan, Ind., are joining together to create a “traditional” prom, which in the Terre Haute suburb means barring lesbian and gay students from attending. They met Sunday to convince the school to support their plans of holding a separate prom.

“We don’t agree with it and it’s offensive to us,” said special education teacher Diana Medley to WTWO-TV. Medley, who doesn’t work at Sullivan, but teaches at a nearby school, added that she doesn’t believe gay students have a “purpose,” that their sexual identification is a “choice” and they should choose God and reform their ways.

The traditional prom advocates opened a Facebook pages titled “2013 Sullivan Traditional Prom” to put forth their views, but  it was quickly taken down. LGBT activist and columnist Dan Savage obtained some of the group’s comments before its deletion.

For the school’s part, the principal distanced himself from the group and said all students regardless of sexual identity are allowed to attend the April 27 dance.

Medley’s controversial comments, which led to a Change.org petition calling for her firing, were enough for some users on Facebook to create a group lambasting her and others’ comments. Created Sunday, Support the Sullivan High School page has garnered 18,000 likes in its short existence.

In the page’s description, the administrator (who revealed she’s a Christian mother at a nearby school) wrote that the group “are standing behind religion to show personal bigotry,” adding “this is the civil rights movement of our time.”

Of course, the heated topic is attracting both sides of the debate, but a bulk of the page’s postings are from pro-LGBT supporters condemning the group’s beliefs and promoting love.

“A son is a son, a daughter is a daughter. These are our children, they are entitled to have the same basic right to love and to be with the one they love. This hate needs to end,” a supporter wrote.