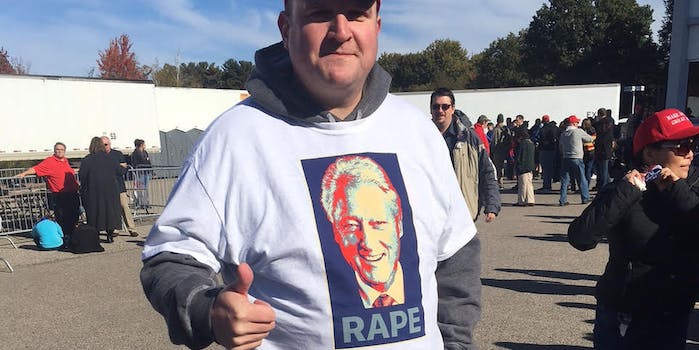 Aren't those cars made in... Japan?

This weekend, as I traveled to witness the seeds of an American movement flourish, I thought back to the fertile swaths of soil that define our nation’s history: Boston Harbor, Ellis Island, Gettysburg. I wasn’t going to any of those places, of course—I was heading to a Toyota dealership in Portsmouth, New Hampshire, for a Donald Trump rally. Cramming myself into a crowded line of raucous New Trumpshire supporters, it was hard not to conjure visions of Eastbound & Down‘s Ashley Schaeffer holding court in his own dealership, which briefly humored me until I realized I was on my way to see an absolutely real orange-tinged tyrant with ridiculous blonde hair prone to racially charged outbursts speak at a goddamn Toyota dealership. Following a luridpalooza of sexual assault allegations on the heels of his newly unearthed 2005 Tic-Tac-scented, pussy-grabbing conversation with Access Hollywood‘s Billy Bush that have sent both his polling and his fellow Republicans in a turbulent tailspin, I was almost expecting this event to serve as a wake of sorts,  if not a bawdy bookend to the contemporary GOP that began with Barry Goldwater’s trouncing in the 1964 election. However, according to many of the thousands that showed up (Trump’s campaign said 7,000 were in attendance, though conflicting reports counted a little under 3,500), it was more of a revolutionary baptism; I was told that I should stop listening to the mainstream media and untrustworthy scientific polls.

As the number of Trump’s accusers climbed to double digits, it was a naughty elephant in the car lot that could not be avoided, but for many of the women in attendance it could certainly be ignored. “He can say whatever he wants, it don’t offend me,” one grandmotherly supporter told me, “I just don’t want that bitch in office!”

Her friend agreed, adding that it was a desperate distraction manufactured by his opponent to deflect from the still-unfolding email hacks and WikiLeaks pressure: “They’re just distracting us from Hillary,” she said. “I don’t care what he says or does. Only people who care are these trampy liberals who love Beyoncé and what’s her name? You know, girl who swings on the ball?” Sadly, I didn’t, but after she did a quick Google search she continued, “Miley Cyrus! She’s a real piece of work too, always up there grabbing her own stuff, but no one in the media cares about that!” I had tried to point out the subtle difference between a woman grabbing her own stuff versus a frisky Cheeto grabbing at a woman’s genitals, but it was clear that we just saw consent differently. Thankfully, we all did find common ground when it was agreed that Clinton campaign chair John Podesta’s creamy risotto recipe did sound delicious on a brisk autumn evening. 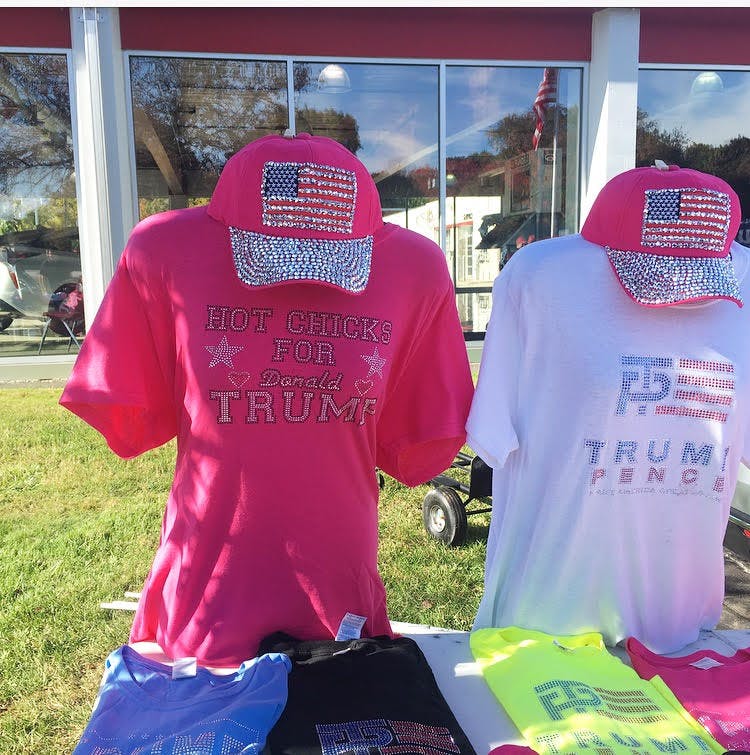 When I asked others in the crowd if they found it ironic that we were going to hear solutions on how to make America great again at a Toyota dealership—the company has plants in the U.S., but it’s a Japanese brand with overseas headquarters—many admitted that they either hadn’t really thought about it or that they simply didn’t care, though one man in a “Trump That Bitch” shirt suggested that maybe it was time to start “sending all these fucking Asian cars back too.” As the warmup speakers began to approach the podium, things only got stranger. We were led in prayer and a pledge of allegiance to The Donald and our country. As a recovering Roman Catholic, even I found it odd to find stoic supporters praising Jesus while wearing shirts that said “Rape,” variations of “Bitch,” and “Donald Trump 2016: Because Fuck You” and starting regular furious chants of “Lock Her Up!”

As Jim Boyle, owner of the dealership, took the stage, the invocations and comparisons between Trump and the Son of God curiously continued. He emotionally told the crowd that we were there to hear a man who had given up everything to save us and our country and that he was still humbled by it. In all fairness, Jesus was the son of a carpenter who also tried his hand at the trade before also laying his life on the line to save humanity before his crucifixion, and here we were now witnessing the media attempting to throw a cross on Trump’s shoulders… but this was starting to get a little bizarre for me. Fortunately for Boyle and his business, he quickly got back on track as to what matters most when he exclaimed, “We’re going to make America great again, one car at a time!” Which sent the crowd into an improbable eruption of “Toyota! Toyota! Toyota!” chants. On the campaign trail, a candidate’s surrogates can often be crucial in garnering votes. For Hillary Clinton, no one has been more instrumental than First Lady Michelle Obama, a woman who has now delivered two speeches so powerful that she has not only made Bill Clinton look like Roger Clinton, she has delivered words so moving and emotional even her potential successor, Melania Trump, has borrowed a few lines here and there. Unfortunately for Trump, he has former New York mayor Rudy Giuliani, who sputtered through his stump next. Giuliani has unfathomably embarrassed himself on the trail all year by declaring Trump a “genius” for allegedly not paying taxes, declaring Clinton “too stupid” to hold office by claiming she was oblivious to her husband’s affairs while the thrice-married, translucent raisin of a man attempted to cover up his own immoral tracks by declaring that everyone cheats on their spouse. Just last week, Giuliani angrily claimed Clinton was nowhere to be seen on 9/11, while photographs of her walking next to him amid the rubble have told a different story. So incredible is his descent into unbridled dementia that it really isn’t hard to believe now that his first wife was his cousin.

Running about 15 minutes behind, Trump finally took to the stage under sunny skies to deliver a well-worn stump to his frothing masses. To stand in the crowd for a Trump event is akin to being at a wrestling show, right down to the lewd shirts and signs, along with repeated outbursts from grown white men who still dress like cool 5th graders. This is and has always been Trump’s main base, a sleeper cell of gun-grabbing misogynist racists who apparently believe the White House Rose Garden has a turnbuckle from which he can jump to leg-drop terrorists, immigrants, liberals and anyone not on board to make America great again.

Proudly telling the crowd that he was just told this was the biggest crowd Toyota of Portsmouth had ever seen, Trump launched into his unique brand of on/off-message talking points while peppering his words with regional handjobs to really get the crowd off. He told us New Hampshire was probably the most beautiful place in the world. He name-dropped his good friends Tom Brady and coach Bill Belichick of the New England Patriots, just as he in Pittsburgh name-checked rival quarterback and alleged sexual predator Ben Roethlisberger. Briefly addressing the allegations against him, Trump quickly attacked the media, which he described as in collusion with the Clinton campaign to rig the election, and effortlessly electrified the crowd to twice turn around and fling middle fingers and “CNN sucks!” chants at the media pen behind them. He still has a knack for ranting on subjects and people who officially have zero bearing on the election or even the country at this point, namely hapless and pathetic “Low Energy” Jeb Bush, a man who was automatically declared the presumptive nominee a year ago, but was so helpless in distancing himself from his father and his crazy brother that even changing his last name to Estevez wouldn’t have made a difference. The real meat and potatoes of his speech, though, was dedicated to the crippling opiate crisis that has New England in a death grip, and although he didn’t touch on it the last time I saw him speak, it was surprising to finally see him touch upon the real root of the problem: pharmaceutical opiates like OxyContin. However, sympathetic stances are seemingly Trump’s kryptonite, so he naturally had to heap shame on addicts when he made the wild suggestion that Hillary Clinton was maybe on drugs during the previous presidential debate, proposing that both candidates take a drug test before Wednesday’s final debate. This turned out to be the real headscratcher of the day for me, given that Trump had sniffed and ranted with a dry mouth through the last two debates, which had many (most notably, former presidential candidate Howard Dean) wondering if he had used cocaine. This was also around the time a sudden wave of nausea struck my gut as he wrapped up for the day. I couldn’t figure out if it was from bad pizza the night before or if it was due to unwittingly becoming a political piece of foie gras after being force-fed crap for a few hours.

Trump left the stage to The Rolling Stones “You Can’t Always Get What You Want,” a song he always ends his speeches with, which always serves as the final irony to me—and it’s a song that perfectly sums up the entire 2016 election, as two of the least popular candidates in presidential history find themselves, in the final weeks of their fight, gurgling in the vile slop bucket that the rest of the nation has been festering in for more than a year. Weaving through “deplorables” who were dive-bombing television cameras with chants of “Bill Clinton is a rapist” and “Hillary for prison,” I finally found solace a few miles down the road and threw up behind a quaint convenience store—though I still haven’t found any meaning in it.