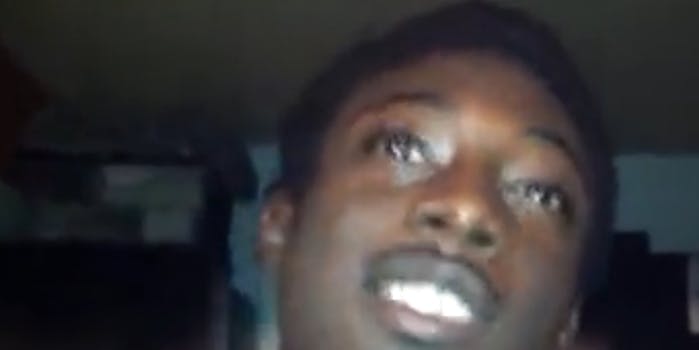 It is a truth universally acknowledged that the shortest and simplest Internet videos are some of the best around. The clip below, for example, has just three elements—a shirtless young man, some vague yet boastful threat of physical violence against women, and a heavy, standing floor lamp—but they work together in such harmony as to make one suspect divine intervention.

The subject of the piece films himself speaking confidently into a cell phone camera as a few insects appear to flit about the shadowy room. “Bitches be like just flirting, still cheating,” he says. “Bitch, if I punch you with my right hand, even though I’m left-handed, did you still get punched in your motherfucking face? Use common sense, stupid.”

It’s right then that a faulty piece of nearby furniture decides to put an end to the strange rant by falling into frame and giving the guy a serious crack over the head. Suddenly, he doesn’t sound all that cocky anymore. Commenters at LiveLeak instantly cried “fake,” but the blow looks painful enough that we can’t readily imagine taking it on purpose just to get a laugh.

Anyway, we feel for you, tough dude—those IKEA instructions are never easy to follow.