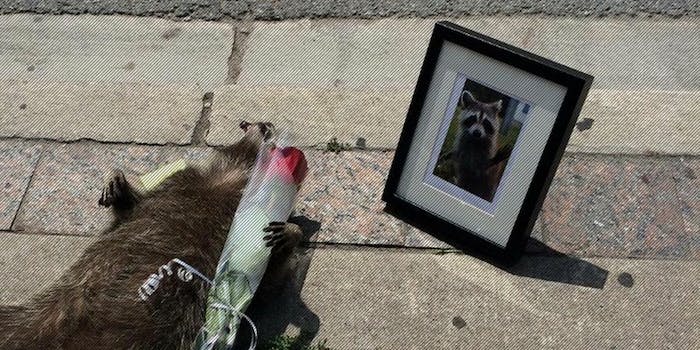 O dead raccoon, ye shall be missed but ne'er forgotten.

Early yesterday morning in the city of Toronto, a plucky raccoon was running down the street when he was suddenly struck by… a car? Lightning? A broken heart?

We may never know the precise cause of his death, but when Toronto residents found Conrad the raccoon’s lifeless form on the sidewalk, their northern hearts were warmed.

An unknown angel of mercy placed a single red rose in Conrad’s clenched little claw. Then another put a framed photo of a raccoon next to his asphalt grave. A condolence card was laid underneath his splayed foot. An urban memorial had begun.

That’s when Jason Wagar stumbled on the impromptu vigil and tweeted it for the world to see.

Someone’s having a bit of fun with this poor guy (who’s been there since at least 8:45 this AM). Yonge & Church. pic.twitter.com/4WshUGX4uM

By 3pm, Animal Services still hadn’t shown up, despite morning calls and tweets. So local councilman Norm Kelly got involved.

As the hours passed, more and more passersby laid cards and flowers at Conrad’s tiny feet. Messages of love and remembrance were scrawled on a piece of paper with a Crayola marker that was left at the scene.

Despite hours of calls to the city asking for the raccoon’s corpse to be respectfully removed, one city worker who finally showed up on the scene was filmed simply taking a picture of the body, then getting back into his truck and driving away.

When dusk settled on the city, the memorial grew into a candlelit vigil as Torontonians reflected on a life cut short.

Citizens began to wonder about possible murder suspects as the day’s end drew near.

. @steviepeters Police are asking for any information regarding the whereabouts of billionaire aardvark Cyril Sneer #DeadRaccoonTO

Finally, at around midnight, a minivan arrived on the scene. Conrad’s lifeless body was taken away, but his spirit remained, touching international news readers the next day.

The city of Toronto worker is now preparing to remove the raccoon. #DeadRaccoonTO pic.twitter.com/DASkviOkiE

#DeadRaccoonTO is now gone but will never be forgotten. Picture courtesy of @KrisReports. #RIP pic.twitter.com/eWwASq8C5M

Friday, the political leaders of Toronto stood bravely side by side and offered both condolences to the raccoon community and direction for those who felt they needed to do something, anything to help.

In lieu of flowers, family of Conrad the #DeadRaccoonTO asks for donations to @TWC_Wildlife to help orphaned critters http://t.co/QxC4DK88aL

Oh, Conrad. You’ll always be remembered just the way you were: as a trash-eating, dog-scaring, hissing little motherfucker. We salute your memory.