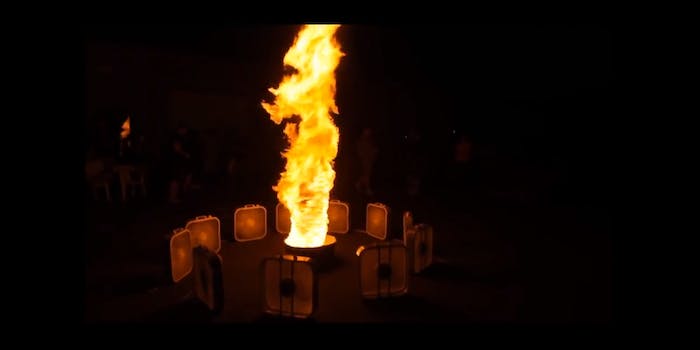 There's one thing scarier than a real tornado—a tornado made of fire.

There were 47 tornado fatalities in the U.S. in 2014. It’s a terrifying natural phenomenon, but there’s one thing scarier than a tornado: a tornado made of fire. Naturally, a group of dudes decided to play god and make their own backyard fire tornado. All it took was a dozen box fans.

Set to some classic Beethoven—the only appropriate choice for fire tornado videos—this video from 2012 received a big viral spike over the weekend from Reddit. It’s actually just the latest in a long line of videos in which people create mashups of their favorite natural disasters—a distinctly Internet-age phenomenon.

A science center in Singapore has a permanent demonstration of a fire tornado with more sophisticated fan technology:

A guy who goes by the YouTube monicker Crazyrussianhacker created his own “Green Fire Tornado” with the help of some chemicals late last year:

It’s worth noting that fire tornados are a real phenomenon that happens in nature. Residents of Canberra, Australia, suffered a great deal of destruction after a fire tornado swept through their city during a brush fire in 2003. This fire tornado wasn’t created by fans or Reddit dorks, and it’s way more terrifying: