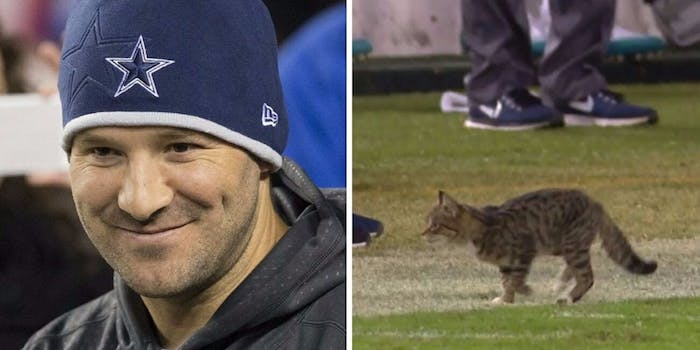 After a mostly successful NFL career, former Dallas Cowboys quarterback Tony Romo has entered the broadcast booth for CBS, and, in his first season, has become a top-notch football analyst.

He’s managed to combine his impressive football knowledge with unbridled enthusiasm and a little bit of humor to make himself a valuable member of the NFL’s most elite broadcasting team. He’s excellent at predicting what quarterbacks are going to do before they do it, and he’s invaluable in describing the reasons why a play worked well or didn’t.

Need an example? Despite the Ravens dominating the Dolphins at the end of a very long game on Thursday night, Romo still had the energy and enthusiasm to describe this loose cat’s running form and agility purr-fectly.

During his career when playing against the Panthers, Bengals, Lions, and Jaguars—the NFL teams bestowed with a cat nickname—Romo maintained a combined 10-5 record. So, clearly he knows about cats, how they move, and how they think. When CBS signed him to a broadcasting deal before the season, executives probably didn’t consider his cat knowledge.

But Romo’s got it, and it’s meow-nificent.