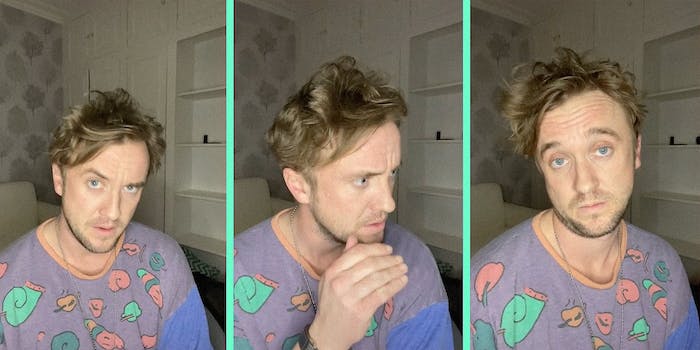 But there's a twist.

Tom Felton, better known to many as Draco Malfoy from the Harry Potter movies, is lip-synching to his old work on TikTok. But there’s a twist: He’s taking on the role of Harry and giving fans the chance to play along.

One viral video features audio from the first movie, in which Draco and Harry have their fateful, first meeting on the train. Felton seems to be playing Neville Longbottom, Ron Weasley, and Harry’s parts in the scene. There’s definitely something a little weird about seeing his iconic Draco expressions paired with Harry’s classic line, “I think I can tell the wrong sort for myself, thanks.”

But the whole point of the video isn’t just to provide some weird role reversal entertainment to his fans during the lockdown. He’s giving die-hard Draco fans the opportunity to lurk in their shared corner of TikTok, dubbed “Draco Tok,” so that they can play their favorite role alongside their favorite actor.

While Felton was apparently initially scared of Draco Tok, he’s since wholeheartedly embraced it. He seems to be having fun with fans and is sharing his favorite duets on his own page.

There is another reason Felton is encouraging fans to duet his video, however. It’s part of a series of promotions he was doing for Peacock TV’s Harry Potter rewatch party.

He even briefly took over the streaming giant’s TikTok account. And as it turns out, Felton may just be the only millennial who has never watched the Harry Potter movies. Peacock TV seemingly saw that as an opportunity to advertise having all eight of the films available to stream. The streamer exposed Felton to his childhood breakout role for the very first time in front of a live audience.