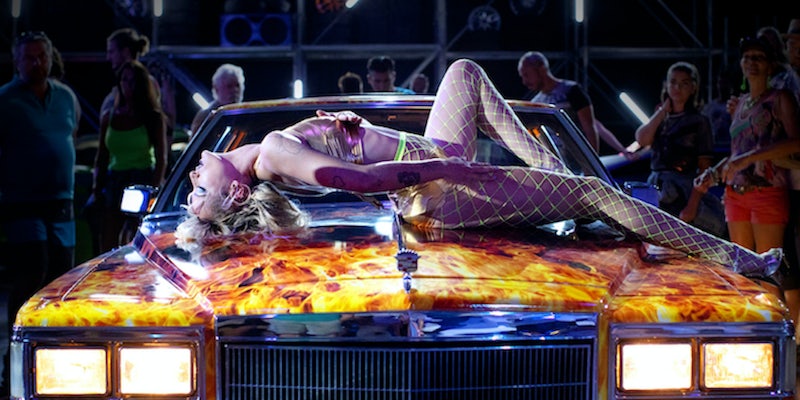 ‘Titane’ is an unparalleled film full of looks and feels

It’s been a good long while since I was surrounded by an audience collectively uttering “Oh my god” or “No no no,” or covering their eyes in anticipation of what came next. Julia Ducournau’s new film, Titane, is a rush. It’s a gutting experience that washes over you in waves. This is cinema.

That said, going into Titane knowing as little as possible is ideal; it’s not the kind of film that lends itself to a quick blurb, though some have tried. Ducournau’s follow-up to 2016 cannibal thriller Raw, Titane already had buzz around it before opening this year’s Fantastic Fest—it won the Cannes Film Festival’s Palme d’Or, making Ducournau only the second woman to receive the honor. There’s also Oscar buzz around it, and much of that is due to newcomer Agathe Rousselle, who plays Alexia.

Release Date: October 1, 2021 (theatrical)
Director: Julia Ducournau
Ducournau’s follow up to ‘Raw’ is a shocking, immersive piece that could be an Oscar contender.

We first meet Alexia as a child, and see the horrific origin of the titanium plate in her head. As an adult, she dances at car shows and we see her intimate relationship with cars play out in one transfixing scene. Dance and the body are a big part of Ducournau’s films; Raw included a few pulsating and transformative performances, but Titane uses it more as chapter markers. Rousselle’s face and body mostly convey her early intentions.

Titane has two distinct halves: Once Alexia is revealed to be, as Ducournau described after the Fantastic Fest screening, “a walking death drive,” she’s forced to flee and we meet Vincent (famed French actor Vincent Lindon), a sad-eyed veteran firefighter who’s still grieving his missing son, Adrien. Alexia hatches a plan to avoid detection: Transform herself and come forward as Adrien. Rousselle’s physical performance of this is stunning, and Lindon’s assessment of the person he desperately wants to believe is his son is heartbreaking.

Ducournau plays with gender and gaze in a way that isn’t forced or overwrought, going beyond the binary to suggest a more elemental interpretation: Alexia as metal and Vincent as fire, merging into something new. Post-screening, Ducournau mentioned Gaea and the titans as inspiration, and she told Vulture in July that she looked to mythology because the genders aren’t as “clear.”

Rousselle and Lindon are absolutely captivating, even without much dialogue. Ducournau’s exploration of their relationship is the purring engine of Titane, showing the fluidity of gender and parental roles, right until the film’s jaw-dropping end. It leaves you with much to think about, as well as a completely new interpretation of “Macarena.”