In defense of Tindering while you poop

All is fair in love and bowel movements.

We all know you’re going to be on your smartphone in the bathroom. You might as well use your time going number two to find “the one.”

For every happy ending, there’s a start to the story. Let that beginning be hopping on Tinder while pooping.

Now, you’re probably thinking to yourself, “ya nasty.” But this is a no-judgment zone. Leave your attitude at the door that leads into the restroom. And let’s face the facts: According to a survey of over 400 people, 61 percent admitted using their phone while going to the bathroom. On top of that, 31 percent said that they stayed longer in the loo to finish up whatever they were doing on their phone. Instead of aimlessly scrolling through your Instagram feed full of basics from high school or returning your uncle’s texts asking about memes, you ought to turn your attention to finding love on Tinder.

Let’s also get something else straight: The idea is that you Tinder before wiping. It’s not like you’re taking care of your butt and then returning your fingers to your phone screen. Any Tindering should happen pre-wiping. 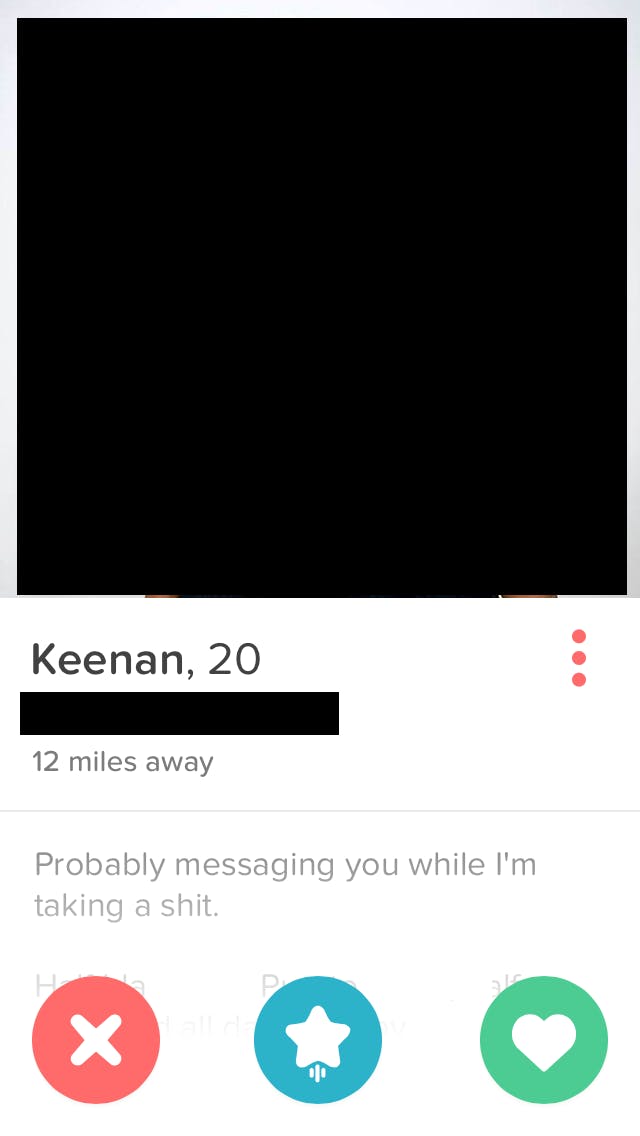 The bathroom stall is the perfect space to take a breather and open up the matchmaking app. While sitting on the toilet, you can truly center yourself and really concentrate on the profiles of possible suitors in a 5-mile radius. Or if you’re having trouble passing that breakfast burrito, let some rapid-fire swiping distract you from your bowel pains.

Furthermore, it’s an excellent idea to get through all your swipes while in the bathroom instead of elsewhere. Imagine doing it at your desk, where your boss can catch you matching and messaging sexxii peach emojis to Tony, 27. That would be a horror. Or at your parents’ house, with both of them nosily looking over all the profiles you’re swiping left on, your mother going, “but he looks like a nice Jewish boy!” And running out of swipes early in the day while in the restroom will also keep you from rudely breaking out your phone while at dinner with your friends.

This way you get to judge a book by its three Tinder profile pictures and a hastily written profile in the privacy of your own oasis.

To make you feel more comfortable with beginning to look for love while dropping off a load, just take a look at the many people who have publicly joined the movement.

TBH I only check my Tinder when I poop, so if I'm giving you a lot of attention that just means I had tacos today.

tinder is a while-I'm-pooping activity

I just picked up nine tinder matches while pooping #winning

Legions of Tindering poopers are out there, shamelessly looking for anything from the next hookup to a possible knight in shining armor while their ass hangs inches above some toilet water. And that’s beautiful.

Oh, and on the occasion that your Tinder date turns out to be a major asswipe once you finally meet up for drinks, no worries. Flush him away just like that nugget of poop you released while first messaging him.

If you already think your dating life is crap, definitely start working on it while on the shitter. But do remember this important rule: Always wash your hands after Tindering and pooping.