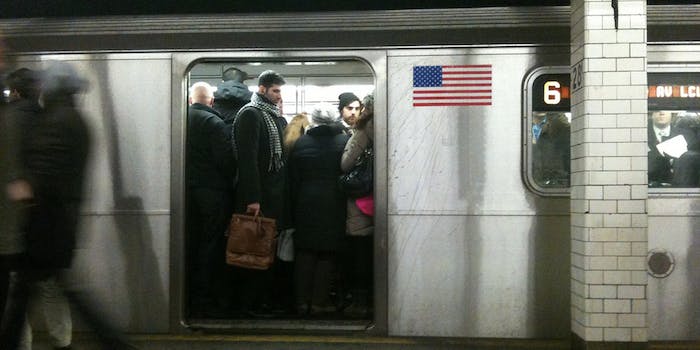 Are people looking for love on Tinder—or hoping to upgrade to more?

People came to New York for a multitude of reasons, but chasing a better life seemed to be the common denominator.

“New York is a town of upgrading. With everything. Upgrade to a better apartment, upgrade to a more hip neighborhood, upgrade to a hotter boyfriend,” a friend warned me over lattes a week before I packed up my life to begin my first full-time writing job.

It logically made sense. People came to New York for a multitude of reasons, but chasing a better life seemed to be the common denominator. It seemed obvious that people came to this city with big dreams and empty pockets, so when the opportunity sprouts up to improve your situation, you take it. In terms of dating, it seemed to translate to: you have a sweet boyfriend until you find an equally sweet one with more rippling abs a week later at a vegan pop-up market in Brooklyn. You break up with your current beau, then date the next one.

I decided to put my friend’s theory to the test. Being 12 months out of a two-year relationship, I downloaded Tinder, a hookup app that currently hosts over 600 million users worldwide. I linked it to my Facebook, selected men seeking men, and waited for eager faces to pop up.

And pop up they did. I was surprised with how quickly I became comfortable with judging people based off of the few pictures they shared of themselves. I began to get a vain sense of self-satisfaction every time my phone buzzed announcing that another person had also deemed me an attractive candidate and, thus, we were a “match.”

I finally mustering up the courage to set aside the small talk and set aside an evening for an actual date with one of my “matches.” As I walked out of the station for the 1 train and zipped up my hoodie I had worn to combat the surprisingly chilly NYC night in May, my phone buzzed. Glancing down at it, a text message flashed across my screen, “I’m here.”

I stepped into the dimly lit bar my date and I had agreed to meet at in Chelsea, and found him sitting on a high top stool by the window. We ordered two red wine sangrias and I became increasingly frustrated as he began to talk about his ex incessantly—why the relationship had been awesome, why it had crumbled, why he was currently in a financial bind because he and his ex had gotten a place together.

I began to size him up; comparing him to how he was portrayed on his profile. Definitely shorter. Definitely older. Definitely less charming than our text messages had hinted at. When we finished our drinks he called over to the waitress standing on the other side of the restaurant like she was an animal, barking out “Check!”

We agreed to split the two drinks and as I laid my card down he started sliding over quarters to ensure the split was “even.” He invited me up to his apartment to check out some art work he had recently curated, noting that I could take off my shoes (“and everything else”) if I wanted to come up—because the old lady who lives below him has sensitive ears. I declined and walked back to the subway station rubbing my arms barely noticing the cold.

He texted me an hour later saying I was great but he wasn’t “in the emotional space” to date. I felt furious, which confused me. Sure, I was rejected by a man I didn’t even want. But the fact that he was on a dating website and didn’t want to date made me want to shout to the online community, “We have a live one over here!”

The same rang true for the other Tinder men I began to see. They would take me to dinner and be lovely and then halfway through the appetizer bring up the haunting memories of their previous relationships. Sometimes they were a few weeks out of their last romantic endeavor, sometimes a few years; either way, it was clear that the battle wounds they had endured were still fresh. As my belt began to tighten from all the free dinners I was receiving, it became clear to me that online dating in NYC through Tinder was actually the graveyard where the ghosts of past relationships roamed free.

It would be easy for me to try and dismiss these men into a lesser group of people who only use online dating to boost their egos, as opposed to me, who was actively trying to find a deep connection with someone.

That would be a lie, though. Although I had put my past relationship behind me, I still couldn’t tell you what I was looking for. I wouldn’t be able to tell you if I wanted someone with a large beard and tattoos or if I wanted someone with a stable 9 to 5 job (not that those two things have to be mutually exclusive). The truth was, I was lonely. That is why we all date in the first place, no? Tinder seemed to be the easier route. I could spend countless nights in a bar hoping someone would strike up a conversation with me, or I could do the technological equivalent of window shopping.

I honestly couldn’t tell you the names of two-thirds of the men i’ve talked to on Tinder without ever meeting up with them. I couldn’t distinguish which ones ran internet start-ups or which ones were carpenters in Bed Stuy. No one on these websites really gives a shit if you cry during Sleepless in Seattle or only eat coconut pineapple ice cream when you’re feeling down. It is all about the fleeting affirmation we seek. It makes us feel good to be wanted for our appearance. It is fun to be flirty but never have to say “you’re sexy” to someone’s face.

Because honestly, who has ever been able to keep a straight face and say “you’re sexy” to a stranger? In real life, if you go into a bar you can’t walk up to someone and say “you’re hot do you think i’m hot?” like you can with a right swipe on Tinder.

From my experience, my friend wasn’t completely right about dating in New York. I quickly stopped seeing New York City as a town of upgrading so much as a town where it is really challenging to make anything stick. It’s true that there are those genuine souls out there yearning for a connection that will last long after the first initial date jitters or casual sex ends. It is challenging to deny the fact that many people use these dating applications to find solace when they’re wondering if they’ll ever find love again.

We all can’t help but wonder after a breakup if another person will ever find us sexy again. It is a yearning for connection we can throw away if we choose to that keeps us logging on. It is this yearning to have autonomy over who we reject and who we accept that we feel we were robbed of in our breakups that draw us to these tools meant to bring people together. Tinder is clogged people unsure of where to go next, and libidos yearning for satiation. A collective buzzing over the city whispering, “Swipe left, swipe right, swipe left.”

I’ve thought about deleting my Tinder, going back to finding people “the old fashioned way.” But the truth is, I don’t feel ready. I may not find a boyfriend (or anything particularly lasting) on dating apps, and I probably won’t get those fabled butterflies in my stomach when a handsome guy messages me, “Sup?” But I do know that when I log on I feel reminded that i’m not the only lonely one out there.

Another friend of mine who lives in the city met her (gorgeous) boyfriend on a dating app much like Tinder. They’re a few years in and seem more content than ever, putting their days of scouring the Internet for love behind them. When I told her about my horrific experiences with Sangria and trying to get laid, she leaned across the table of the crowded bar we occupied and said, “What else do you have to lose by going on a few of these Tinder dates?”

I often think about her question as I ride the train to work. I’ll try to make eye contact with the handsome men in Armani suits as we are jostled throughout the subway cart. All their eyes seem to be zeroed in on their lit up screens. I wonder if there is really any turning back; if there really is any way to make an impression. I load Tinder onto my phone and hope that one of the faces belonging to the men pressed against my body flash across my screen.

Shawn Binder is a New York City based web producer and writer. His work has appeared on VICE, SpliceToday, The Huffington Post, Thought Catalog, and the anthology “BOYS.” You can buy his e-book, “Everything Is Embarrassing,” on Amazon.