The Prague Tinder power rankings: A travelogue for swiping abroad

A top 5 of the sh*t I've seen in the Czech Republic.

Oh, Tinder: the great matchmaking tool of our time that takes the effort out of dating by supplementing it with what feels like a card game and subsequent gambling addiction. Tinder is the method of ease festivalgoers choose to solicit sex and drugs when too fucked up and engrossed in their screens to actually talk to the person next to them who also happens to be distracted. Tinder is also the preferred method of travelers everywhere for getting down while abroad.

I’m traveling for the year, visiting a new country each month with a group of digital nomads whom I can’t escape on the dating service—swiping right each time a familiar face appears in hopes that my Tinder chicken gambit will pay off and make it weird. Hell, I even fooled around with a fellow traveler sans app by using the original hookup tool: alcohol. I can only assume that’s what 80 percent of the bros and gals on Tinder were also on when crafting their Prague, Czech Republic, profiles.

Back home in New Orleans, the Tinder de rigueur was men on boats holding up fish, hunters with ducks strapped around their camo jackets like dead animal chandeliers, and lots of stupid Mardi Gras photos. Prague Tinder is different. Prague Tinder is forced style and lack of substance: hundreds of sepia- to grayscale-tinged photos taken in luxury vehicles with enough brands loaded into an outfit to warrant a sponsorship. Occasionally, though, the truly out of place will appear, their dating prowess so overly advanced they deserve their own platform altogether.

These are the Prague Tinder gods. Here are their power rankings. 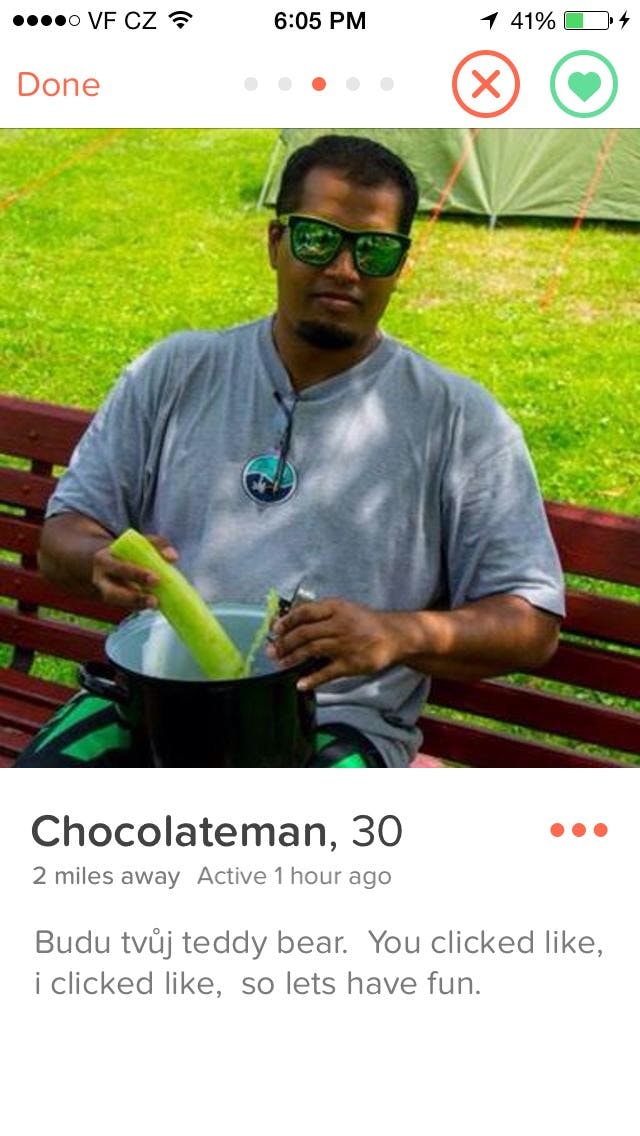 Chocolateman has fast become my new favorite superhero. Chocolateman doesn’t give a flying fuck if you find his name offensive or are confused by just what he’s doing with a giant pot and one vegetable. Is that a fishing reel in his left hand or is he somehow using a pencil sharpener to peel a stalk of celery? Chocolateman offers mysteries, HDR, and the ability to brandish large pots containing little in public. Deep down, though, he’s just a teddy bear. “You clicked like, I clicked, so let’s have fun.” Aye-aye, ya flavorful bastard. 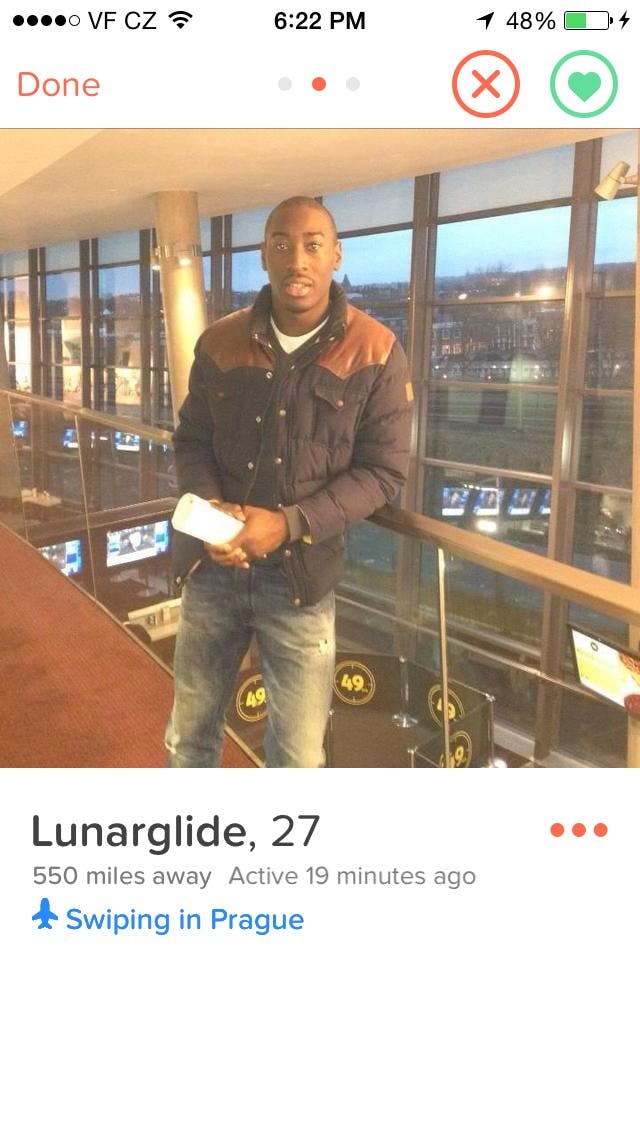 When I first showed this dashing screenshot of the man I’m fast referring to as Moon Lube, all that a Tinder compatriot of mine could say was, “We fought two world wars for this asshole to call himself Lunarglide?” Lunarglide is apparently a product of bringing peace to the world by way of devastating world conflict. He’s the melding of exiting the stratosphere and entering the booty, like a damn skyrocket in flight. I think he’s in an airport holding a burrito and bound for glory. At this point, I can’t even tell anymore. 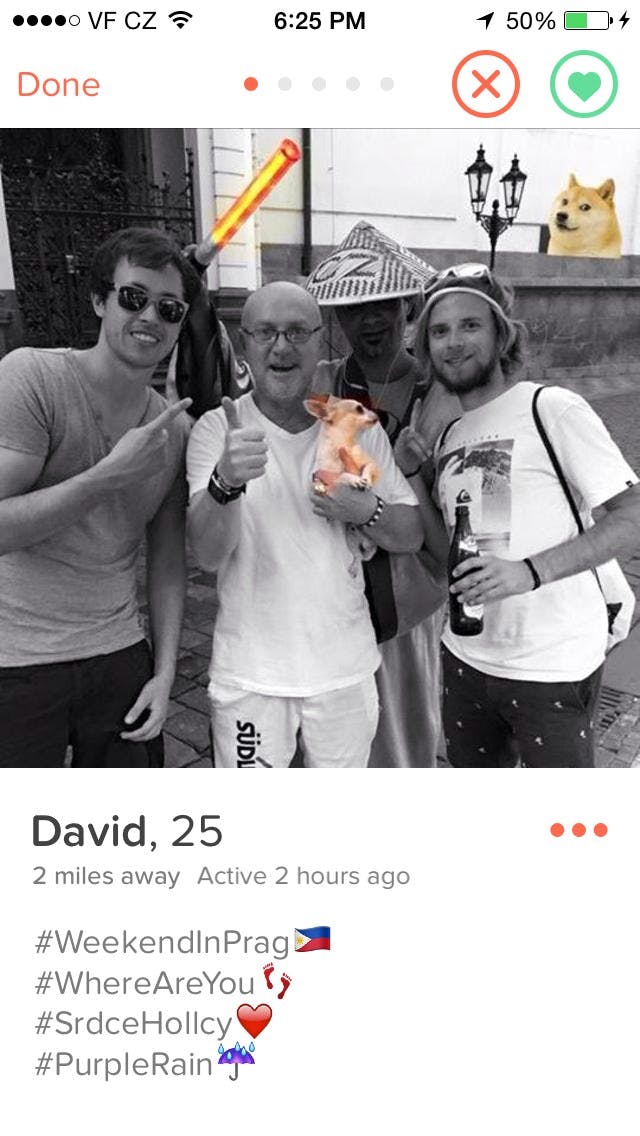 Like his biblical namesake, David is the underdog(e) that just might pull through. Swap beheading for bedding and you probably have David, armed with a camera and a deep love of memes. I also have no idea who he actually is based off of his pictures. Is he the old guy? The technicolor chihuahua? Perhaps if I sing “Purple Rain” loud enough and long enough he’ll appear to clear the mystery once and for all, snap a strange photo of me, then disappear into his other apps to reemerge with a Mr. Y U No on my shoulder and some weird color corrections. 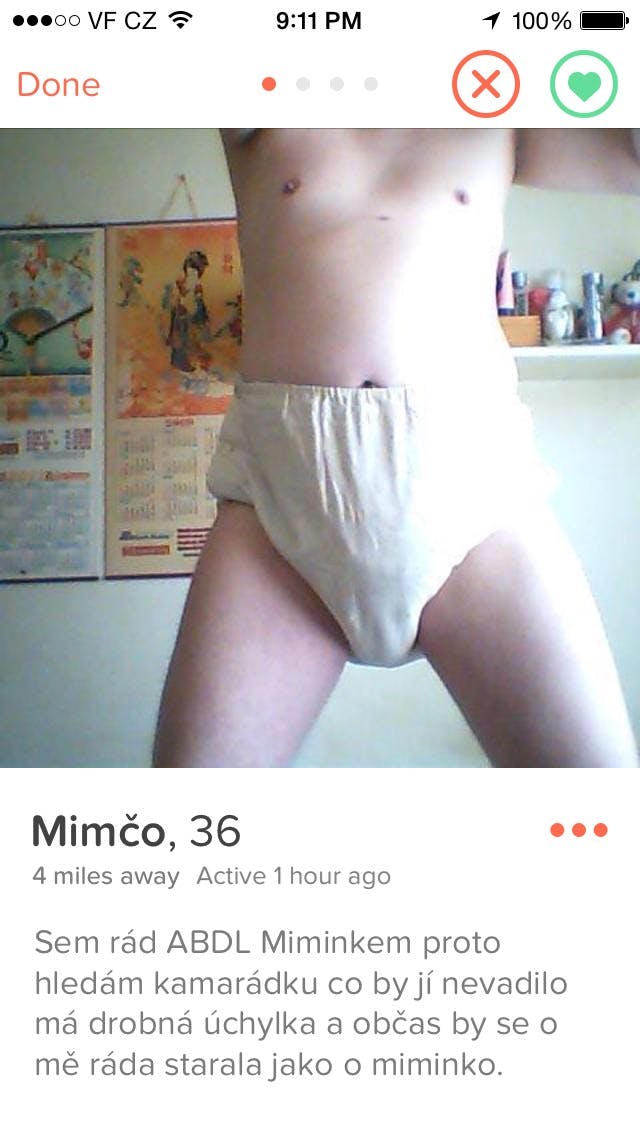 More commonly referred to as “that diaper guy,” Mim?o is not afraid to show the world what he’s into. Seriously. His only photos are either of him in diapers or standalone product shots of those water diapers with the weird patterns and unfortunate ruffles and rickrack surrounding their elastic. Needless to say, it was easy to swipe left and keep going, though the images of Mim?o have sadly not been forgotten. 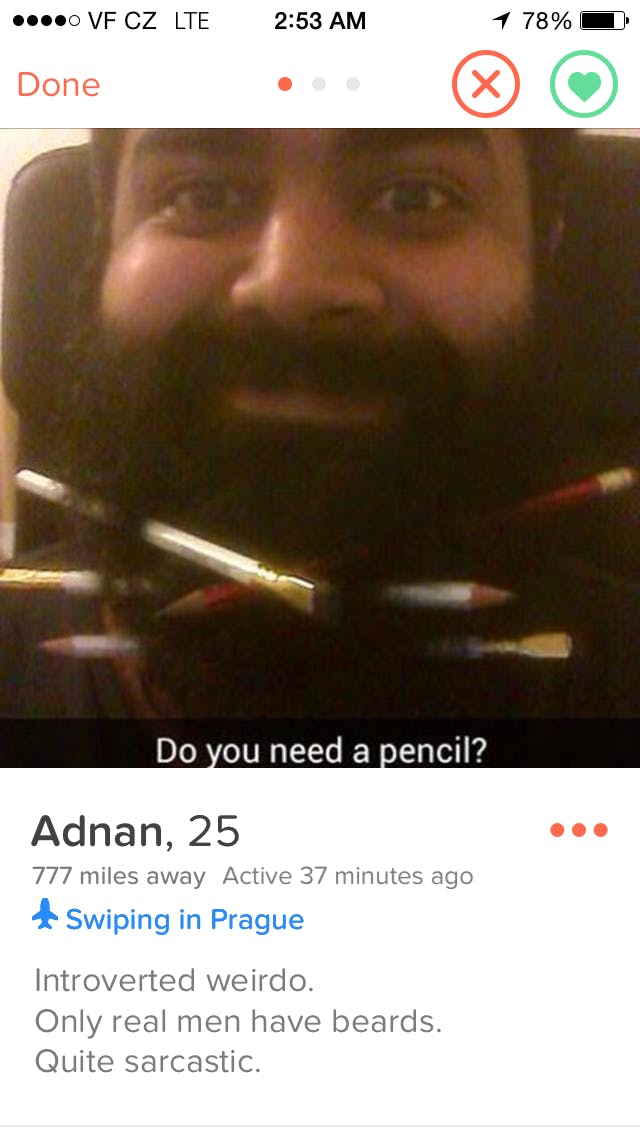 I feel like there’s some type of burgeoning romance about to happen between the chewed out and entangled beard pencils of Adnan and the pencil sharpener/veggie implement of Chocolateman. Perhaps this is what Prague Tinder is actually all about—connecting the weirdos with the even bigger weirdos by way of a wary American whose only dating success abroad so far has been her ability to use the unmatch and report functions. 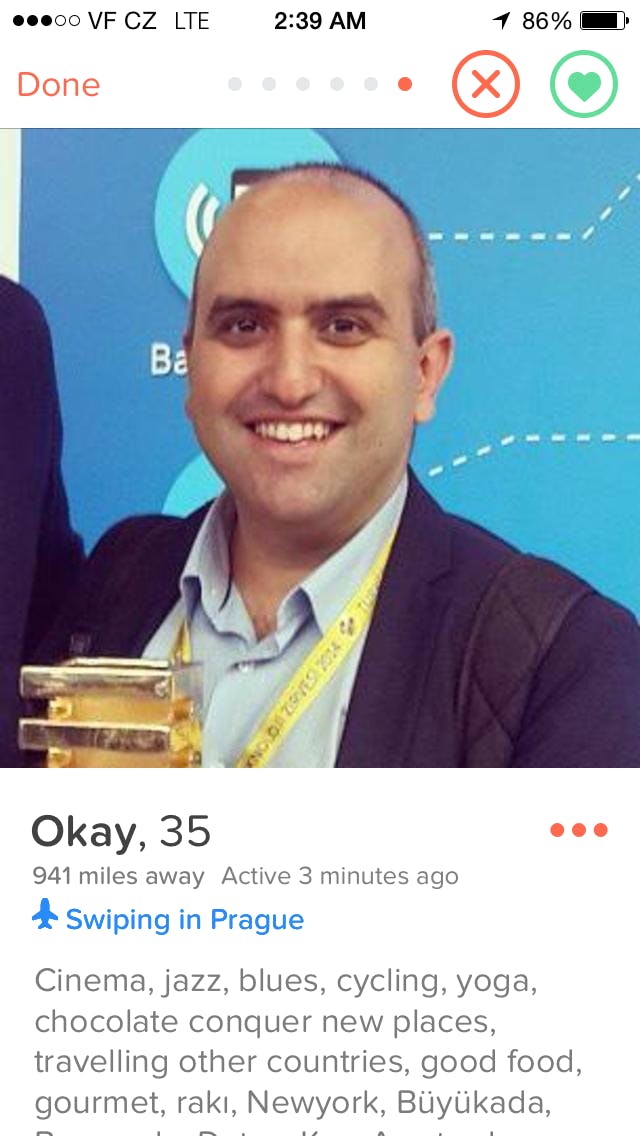