Tinder CEO Sean Rad recently declared that he wants to cultivate a new passion: collecting art. Rather than sit around swiping away endlessly on the app he co-founded, he’s on his way to art galleries and museums, checking out works of art that he could conceivably bring into his home, where he will then continue swiping—but with cool stuff on the walls.

Rad also recently said a few straight up genius things about the state of hookup culture, feminism, sexual ethics, and Tinder itself, which led me to further understand the type of art that will truly enchant him. Being the generous person that I am, I put together this very chill list of art for Sean because, let’s face it, I know what people like both on and off Tinder.

There’s so much sex in Tracey Emin’s MY BED

“That’s totally the scene of a successful Tinder match!” Sean would muse to himself while considering how much he’d pay for Tracey Emin’s My Bed piece, on loan for the next 10 years or so the Tate. Unfortunately for Sean, it was purchased in 2014 by German businessman and collector Count Christian Duerckheim. Artist Tracey Emin has said that for her, this piece is about the absolute breakdown of her life at the end of a relationship. But Sean is convinced that this is just the scene of a really hot Tinder hookup. Then the real lightbulb goes off in his head: Wait, it’s about feminism AND Tinder!! “Feminism has led to [hookup culture] because now women are more independent and pursuing their desires,” Sean thinks. “And that leads to both parties being more sexually active. It’s not because of Tinder.’”

Back in New York, Sean might stop by Metro Pictures Gallery, where he’d encounter a few works by artist Cindy Sherman. He’s been hearing about her work, and he isn’t sure if it’s feminist or not, given dissertations like Courtnee Kendrick’s “When a ‘feminist’ artist is not a feminist: Challenging Cindy Sherman’s constructed position in discourse,” which examines how Sherman’s classification as a feminist by art historians and critics has more to do with the context of 1970s feminist art movements than Sherman’s actual art. He’s also wondering about her blackface moment, but since he hasn’t seen people doing that sort of thing on Tinder, he figures there’s probably something fucked up about it. When he sees some of Cindy’s actual work at the gallery, he realizes that her issue isn’t armchair feminism or overt-disguised-as-casual racism—it’s that she just cannot decide who she is, and for that reason, she will never win Tinder! Sean decides to invest in just six of her portraits; that way he can think of her as a full Tinder profile of a woman-as-object that he could definitely bodyswipe right on and fall in love with. Because he did say that he was addicted to the app, which means he does “fall in love with a new girl” every other week. After all, what is love but a chemical mixture that mimics addiction?

That’s some really heady artwork for, I wanna say, sodomists?

There are a lot of messages about cultural and social identities, particularly subliminal racism and queerness, to be found in the work of Glenn Ligon, one of my favorite artists. This stuff is pretty heady, and it’s definitely beyond what Sean deems to be cool, chill art, but he wants to purchase it anyway because the people who like it could represent an important demographic largely ignored by Tinder: people turned on by intelligence. “Apparently there’s a term for someone who gets turned on by intellectual stuff,” says Sean, baffled by the idea that maybe there’s more to attraction than a hot bod and good face. “You know, just talking. What’s the word?” His face creases with the effort of trying to remember. “I want to say ‘sodomy’?” Try again, Sean. We are sapiosexuals and WE ARE A HIGHLY UNDERREPRESENTED NICHE MARKET. But your advertising won’t work on us because we’re, like, too meta.

Back in his hometown of Los Angeles, Sean finds himself thinking more deeply about the mechanisms of Tinder, which were obviously lifted from gay cruising app Grindr. As he explores the ONE Archives at USC, checking out works from Queer Los Angeles 1945-1980, he asks himself: Is this art about gay hookup culture, or is it just here to predict Tinder? Either way, this art feels very psychic to Sean. But he’s still confused about how he ripped off of Grindr’s interface in order to create Tinder for the straights. It’s something that came to him at a LACMA panel about selfies, when queer Marxist theorist Jack Halberstam called him out on this:

“When queer theorist Jack Halberstam pointed out from the audience that claiming marriage and life partnership as the goals of using something modeled on Grindr, a gay cruising app, seemed problematic, Rad then changed his tune—truly, an equal opportunity businessman—and shifted his pitch: Tinder has no end point or goal, he admitted. It can be for whatever you want it to be.”

That conversation really left a mark on Sean, which is what sent him to the ONE Archives to learn more. But instead of talking with curators David Evans Frantz and Mia Locks, he decides to enter the bathroom, where he hopes to experience cruising as it was before the dawn of hookup apps!

Really original views about women in postwar Europe at COBRA

Sean then stops by a show at Blum & Poe, a blue chip gallery that he knows like the back of his Tinder algorithm. While wandering this exhibit, The Avant-Garde Won’t Give Up: COBRA and Its Legacy, about a postwar European movement named for the cities of Copenhagen, Brussels and Amsterdam, he notices a painting that says, simply, WHORE. He pauses. This is interesting, he thinks to himself, because is it really challenging the ways that women are both shamed and celebrated for their sexuality, or could it be about something else completely?(!) 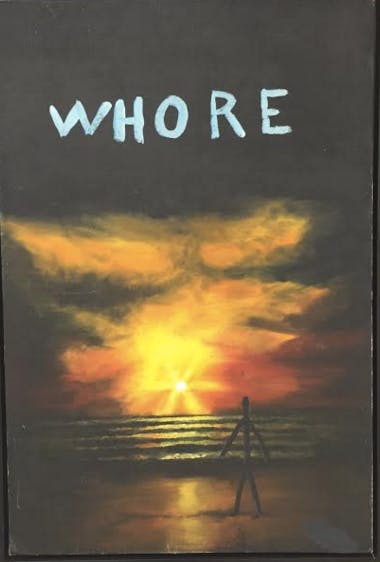 Elsewhere, Rad notices a painting of two women lounging, their eyes carved out completely. He’s so moved by how sensitive their connection seems to be, despite the fact that they have no eyes and the white swan floating in front of them is soiled—and also blinded! 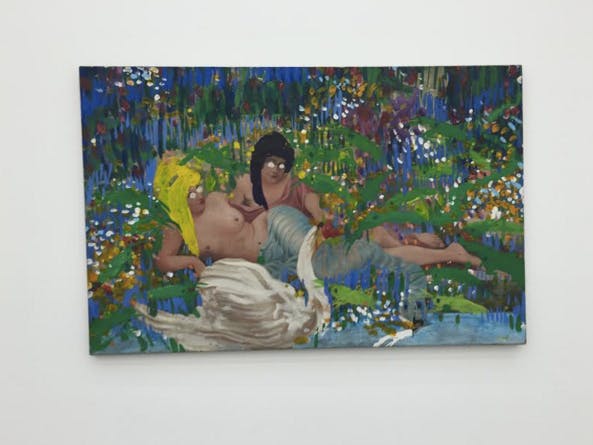 “Wow, they must obviously be besties!” he thinks to himself. Then, upon taking a closer look, he sees that they may in fact be friends with benefits, which is even better, because all sexual relationships between women are definitely created exclusively for the male gaze. With such honest portrayals of female sexuality and close female friendships, Sean sees that this is all just a European art movement fomented by a bunch of genius white men who indeed predicted the rise of Tinder. He feels that he should purchase both of these pieces, as a way to show that he definitely supports women and their freedom to do whatever they want sexually!

“Look at what’s happening in society,” says Sean to the annoyed gallerist who happens to be in today. “We’re living in a technical age, it’s creating transparency and equality and connecting us. On top of that, women are more independent than ever. Tinder isn’t redefining romance. Progress is.”

Damien Hirst’s “For the Love of God” is actually about Tinder, of course!

For the Love of God is a sculpture by artist Damien Hirst produced in 2007. Media: Platinum, Diamond, Human tooth pic.twitter.com/y5jL3daCCa

It’s about time Sean got the one piece of art that is capitalist to the core. That’s why he wants to buy Damien Hirst’s diamond-encrusted skull, “For the Love of God.” This thing is either about money or Tinder—or both! It’s like, this is what happens when you become a successful entrepreneur at the age of 29. This one’s a no-brainer! Or should I say, no-skull-er!