Another month, another chance to test the tepid, urine-soaked waters of Tinder (seriously; just ask the diaper guy) in a different foreign city. Exploring the dating app last month in Ljubljana was a dismal pursuit that only netted me notoriety in my group and not nearly enough pizza.

I spent my August in Cavtat, Croatia along the Adriatic Sea—a place with pizza and copious seafood. It’s a sleepy, concrete beach town near Dubrovnik (aka King’s Landing) that boasts maybe 2,200 locals and a revolving cast of gaudy yachts on its banks. Damn near everyone I was traveling with had the hyper-specific goal of finding a Tinder match with a boat and riding that thing harder than the Titanic hit an iceberg.

Spoiler alert: I had a boat-free month. I haven’t been on a single date, but I have finally gotten laid. The penis in question, hilariously, had cockblocked me from two different men in the same evening. Rather than not doing my job and taking up a Tinder bro on his romantic ideas of jet skiing in the daytime or joining him for drinks in Dubrovnik after I clocked off, I decided to shut that shit down because he didn’t know what stouts and porters are. Beer is apparently as important to me the number of children I’ll have once I settle down. (Ha!) And the hot Canadian man I met at the jazz party I ended up attending instead must’ve been insanely bewildered when my drunk ass mysteriously jetted off without explanation.

Instead of getting my freak on that night, I taught the straightest, whitest dude I’ve ever been with what voguing is and sent him an article on Madonna’s extreme dieting, because nothing says total heterosexual foreplay like an hours’ worth of dance-off videos on YouTube. I fell asleep watching the intro to RocknRolla before moving into his bed, effectively capping off another sexless evening. Two weeks prior, our shower sex ended with his maid walking in on us, so I guess you can’t have it all.

But you can certainly have more power rankings. The men of Cavtat and Dubrovnik brought their A-game, as in: artwork, animals, and all-out asshattery. This truly is the crème de la crème of Croatia. 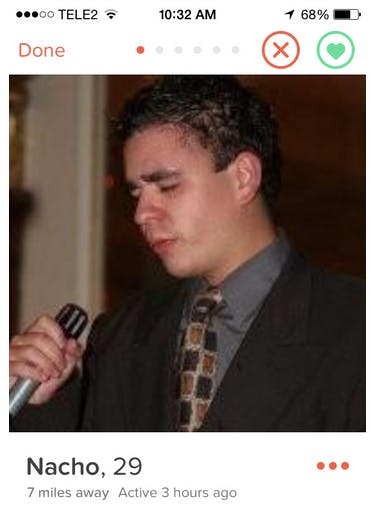 The unrestrained passion of this photo of Nacho gripping a tiny microphone and crooning like a goddamn rooster is its own sensual activity. “I like pretty girls beautiful and sweet” says the salty but savory tortilla chip treat in Spanish. The only thing that’s amiss with Nacho—hyper-culinary name aside—is his used-car-salesman wardrobe. From the Men’s Warehouse discount overcoat to the dental-office-wallpaper tie, Nacho’s probably had an easier time melting cheese over himself than getting panties to drop. 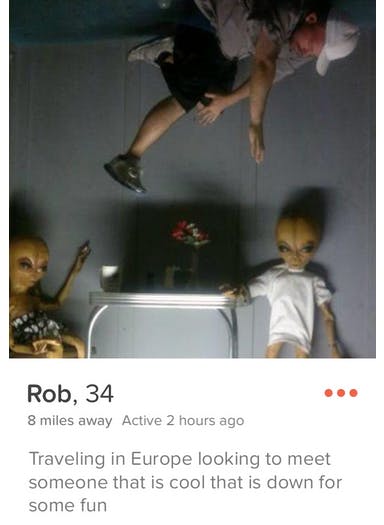 Let this abducted hunk melt the steel beams of your heart. Rob probably lost a game of Pictionary via Lite-Brite with these ancient aliens, which is why he’s floating away. The alternate scene in my mind (and with a little bit of upping the exposure on this photo) is Rob as a hapless waiter trying to show these shirt-cocking Martian patrons what a real American diner meal is—romantic and idiosyncratic. His pièce de résistance is recreating awkward b-boy poses on the ceiling because he’s actually horribly uncoordinated. In a game of “marry, fuck, kill” the aliens would probably get it. 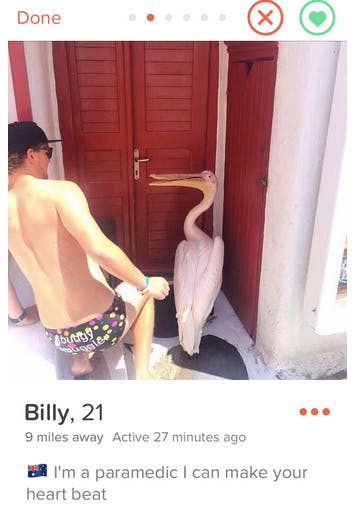 Here’s Billy, trying to play god while also romancing some type of angry egret or heron with his “budgy smuggler” brand swimsuit; a brand that is basically the most dick-in-the-face faux Speedo you can buy without getting free flavored lube packets thrown in with your purchase. Dude’s avian tryst clearly didn’t go that spectacularly if the bird won’t even open the door to their apartment and take the fight inside. Avoid the drama but maybe get him to turn around and show you his budgy—whatever the hell that means. 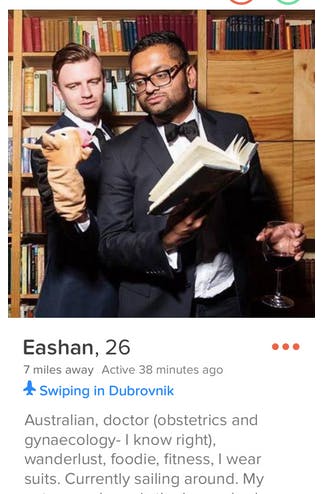 This could’ve been my boat guy if “boat guy” somehow turned into a euphemism for someone who not only sails but carries a speculum with them. Eashan has a whole lot going for him, but it’s hard to imagine a date with this dapper gentleman without that hand-puppet horse friend grinding on his ass while he reads Grimm’s Fairy Tales. The glass of wine could go either way. 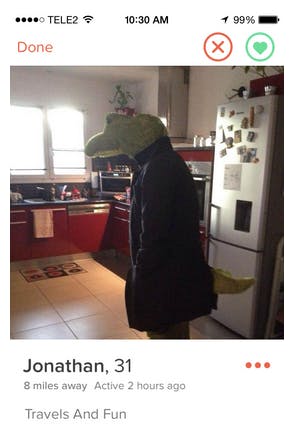 Jonathan is either on his way to a San Francisco park in the 1970s to join the flasher movement or frozen in a different portion of time, waiting for his Hot Pocket to finish microwaving. Neither travels nor fun really come from being stuck in your kitchen while existing as a non-sentient plush alligator. I bet he’s an absolute champ to cuddle with, though. 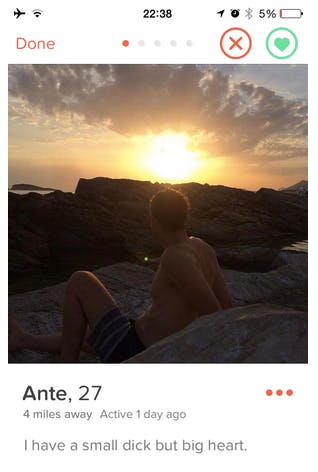 As the sun sets on another dateless month, I can’t help but applaud the honesty of Ante. There’s a place for you, sir. It’s called the the Smallest Penis in Brooklyn Pageant.