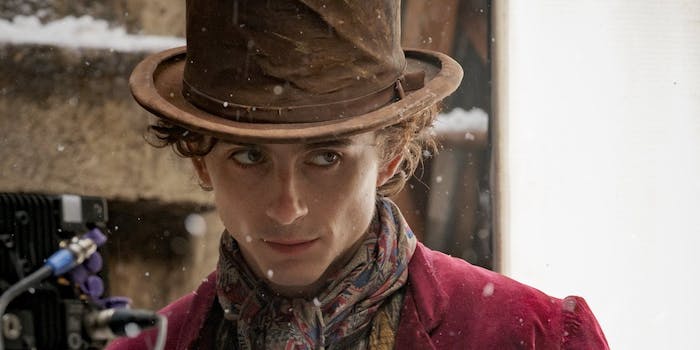 Timothée Chalamet gets compared to Gonzo, Bill the Butcher in first ‘Wonka’ photo

The film is supposed to be a Willy Wonka origin story.

Timothée Chalamet gave us the first look at Wonka, a prequel to the Roald Dahl novel Charlie and the Chocolate Factory that’s centered on a younger version of the eccentric candy factory owner. There was some excitement and annoyance at the nature of an unnecessary prequel, but it also provided proper fuel for a variety of memes poking fun at the look.

The photo of Chalamet looks as though it walked straight out of a Victorian novel. There are hints of both Gene Wilder and Johnny Depp’s previous iterations of the character. Chalamet’s coat is a similar color to Depp’s Wonka while his hat is closer to Wilder’s Wonka (his hat also appears to be made out of chocolate). The coat is detailed with embroidery, and instead of a giant bow tie, Chalamet’s Wonka opted for a scarf.

Instead of purely getting fans—particularly the millions of people who follow Chalamet on social media—excited about a new movie that won’t be released until 2023, it largely prompted jokes about how Wonka was sexy now thanks to Chalamet’s casting.

And to bring back an old internet favorite, the Once-Ler even got name-checked as several people predicted a resurgence for the Tumblr meme.

People also couldn’t help but notice the similarities between Chalamet and Gonzo playing Charles Dickens in the classic holiday film A Muppet Christmas Carol, all the way down to the matching colors of their coats and hats.

Film aficionados went in another direction when they saw the photo. In Chalamet, they saw a younger version of Bill the Butcher, the mustachioed character that Daniel Day-Lewis portrayed in Gangs of New York—and would take Wonka in a much different direction if there were any similarities apart from the aesthetics.

Warner Bros., the studio behind Wonka, has been vague on details surrounding the film apart from the synopsis, which describes Wonka as “an origin story that explores the vivid, mythical beginnings of the imaginative young inventor before he becomes the renowned scrumdiddlyumptious Mozart of chocolate.” It doesn’t come out until March 2023, so there will be plenty of time to argue about who this movie is even for. Until then, the potential of Chalamet’s Wonka as a grand meme is limitless.