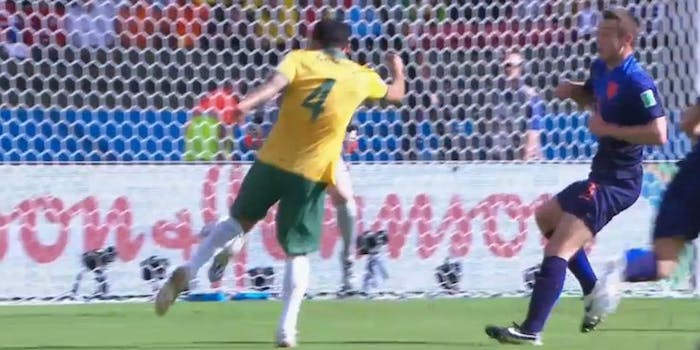 It only took 70 seconds for Australia's Tim Cahill to knock the Dutch flat on their back.

Last week, it looked like the Netherlands was set to roll through the World Cup. Behind two goals each from super strikers Robin Van Persie and Arjen Robben, the Dutch demolished Spain 5-1 in the worst defeat ever for a defending World Cup champion. So when Arjen Robben again scored early against relative minnows Australia, it looked like the Dutch were about to stomp all over the hapless Socceroos.

It only took 70 seconds for Australia’s Tim Cahill, who normally plies his trade for the New York Red Bulls in Major League Soccer, to punch back and knock the Dutch flat on their back. In what’s already being called the “goal of the tournament,” Cahill one-times a cross from the right side of the field, blasting it past the Netherlands’ helpless keeper into the upper-left corner. We guarantee sound of that volley was heard loud and clear all the way back in Australia.