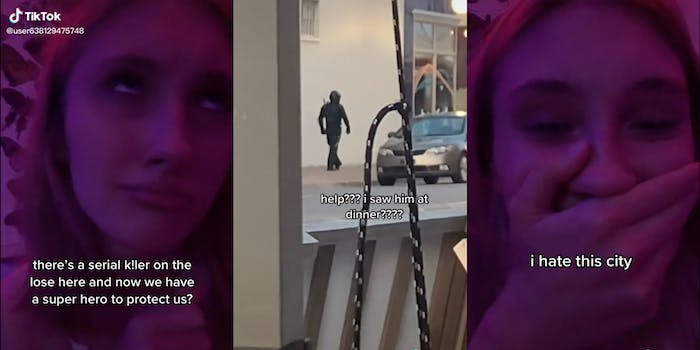 ‘What even is this’: TikToker captures encounter with masked ‘superhero’ hunting suspected ‘Little Rock Slasher’

'Nah pack it up avengers.'

In Little Rock, Arkansas, there’s an alleged serial killer on the loose. Fortunately, there’s also a superhero vigilante who reportedly vowed to take down the villain.

Abi captioned the TikTok, “I can’t with this stupid city. What even is this.” As much as the situation sounds like a comic book plot, according to a KATV story published in April, four stabbings in Little Rock over the past year appeared connected. Three of the stabbings were fatal.

Little Rock Police Chief Keith Humphrey said that the stabbing victims were chosen at random by the suspected serial killer. They were all people walking around the Midtown area of Little Rock in the early morning hours between 1am and 4am.

In the TikTok, Abi shared a spotting of the superhero vigilante publicly known as ShadowVision, who told the Arkansas Times he’s on the hunt for the Little Rock slasher.

On May 2, ShadowVision issued a public challenge to the serial stabber, writing on Facebook, “I know that the serial stabber is keeping a eye on my page here. So this is a threat to you when i find you i will show you what i do to serial killers. I am hunting you right now.” His page, which is labeled a community service, has over 10,000 likes.

ShadowVision claims to have “stopped a couple of armed robberies” and “exterminated two serial killers.” The Arkansas Times pointed out that these claims could not be verified, although ShadowVision asserts they “happened long ago.”

Folks on TikTok are fans of the “superhero.”

“I can’t why are y’all roasting ShadowVision,” one person commented in defense. Another said, “I KINDA LOVE IT.”

Others were skeptical of the vigilante, questioning his methods.

“Y’all don’t even understand how deep these guys who dress up as [superheroes] go it’s genuinely crazy,” one person said. Another cracked, “Nah pack it up avengers.”

The FBI is reportedly helping the Little Rock Police Department with the investigation and the Bureau’s Behavioral Analysis Unit is consulting with the case.

Neither ShadowVision nor Little Rock Police responded to the Daily Dot’s request for comment.