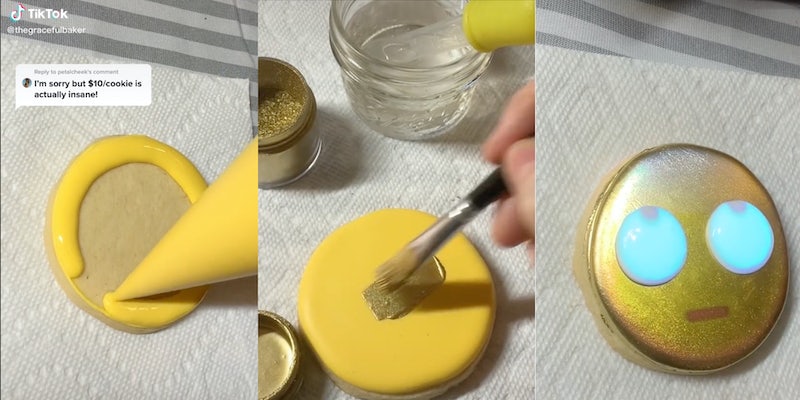 ‘If you think it’s too much don’t buy it’: TikToker breaks down the cost of her $10 cookies, dividing viewers (updated)

‘Take into consideration I live in New York City; one of the most expensive cities to live in.’

A baker on TikTok explained why she would charge $10 for just one custom cookie—but her pricing has divided viewers.

In the video, user @thegracefulbaker, or Grace Gaylord, responds to a comment that says “$10/cookie is actually insane!” The initial comment was in regards to another video Gaylord made where she stated the amount she would potentially charge if she sold her cookies.

For two dozen cookies that cost $10 each, she would earn $240. And to help explain why she’d charge so much, she breaks down the cost of labor and supplies. Since posting, her video has received over 19 million views.

Immediately, she explains, she would deduct about $10 from her earnings to pay for supplies and ingredients—leaving her with $230.

The real cost comes from labor, however.

Gaylord says that communicating with her clients, designing a set, making the dough and baking, icing and decorating, cleaning up, and packaging takes about 8 hours total. That means she would earn a little over $28/hour for her work.

And if she does the same amount of work annually—and takes two weeks of vacation—she would make about $57,500.

“Is $57,500 an insane salary?” she asks. “Take into consideration I live in New York City; one of the most expensive cities to live in.”

She explained that if she charged only $5 per cookie, her annual salary would be less than $30,000. Although that number is far below New York City’s median individual income, some viewers still thought she was overpriced.

“It’s beautiful work, but $10 is very pricey for ONE cookie,” someone wrote. “Not saying YOU’RE not worth it.”

“I’m so confused because these aren’t like.. special or unheard of cookies?” said a third. “And nobody made you live in NY.. Way over priced.”

To one of these comments, the TikToker responded that $10 cookies are for special occasions.

Some commenters were more sympathetic to the baker.

“She needs to make a profit yk,” another said.

In an email to the Daily Dot, Gaylord explained that her main job is as a content creator. She does not typically sell her cookies, but was explaining what she would charge if she did.

“The video in question illustrated the hypothetical: if I sold these cookies how much would I sell them for,” she wrote. “So what do I think about all the (negative) comments? I say: keep talking :) I’m here to both entertain and educate, and I’m glad to have started this conversation.”

Gaylord also told the Daily Dot that she didn’t take the negative comments to heart.

“You might be surprised to know that I don’t take offense to any of the negative reactions to this video,” she said. “As a content creator I have heard worse and developed a thick skin because of it, but mostly because a person’s reaction to something is a reflection of their own sense of self and self-worth…it is not a reflection of me.”

She thinks that the responses to her video highlight some bigger issues. She knows her worth and is vocal about it, which she explained was likely triggering to some viewers.

This post was updated to include the TikToker’s full name.