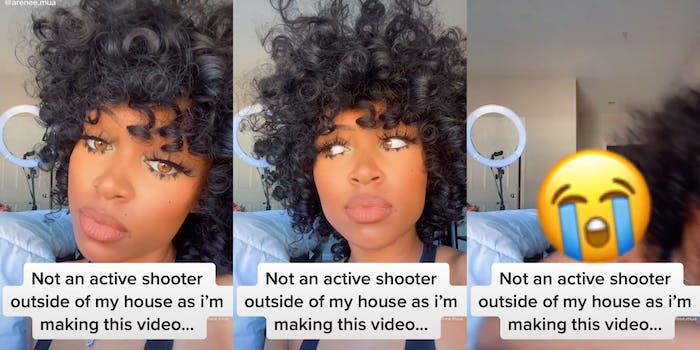 TikToker’s video interrupted by an active shooter outside her house

She went back for her phone, though.

TikToker and makeup artist Amber Renee (@arenee.mua) was in the middle of filming content for her channel when gunshots outside her house had her diving for cover.

The shooter never appears on camera, as Renee had better priorities than risking her life to try and capture footage. Instead the video shows Renee posing and adjusting her hair in front of the camera before stopping, obviously confused and concerned, at the sound of the first gunshot. It’s when the next shot goes off that she realises what’s happening, and immediately throws herself sideways to the floor.

Despite this display of very good instincts, Renee did then do something slightly unwise, reaching up from her prone position to rescue her phone from off of her filming set up.

People found her reaction to the whole situation deeply relatable.

And while some couldn’t believe she’d risk going back for her phone, others admitted they’d have done exactly the same. Maybe to call the police, or maybe just because they weren’t going to lose their damn phone like that.

Renee responded to one of the comments on her video, saying that while she’s generally used to the sound of gunfire, this time it caught her off guard as she was filming right next to the window.

The Daily Dot has reached out to Renee and will update this article if she responds.